This article is modified from Perez-Harguindeguy et al (2013). The “New handbook for standardised measurement of plant functional traits worldwide” is a product of and is hosted by Nucleo Diversus (with additional Spanish translation). For more on this and on its context as part of the entire trait handbook visit its primary site Nucleo DiverSus at http://www.nucleodiversus.org/?lang=en

Plant species exert strong control over decomposition rates through the -afterlife’ effects of attributes of living plant modules (leaves, stems and branches, roots) on the quality of their litter. Shifts in species composition, as a consequence of global changes, land use or natural succession are strong drivers of changing litter decomposition rates in various biomes worldwide, with feedbacks to climate through the release of CO2. To estimate the organ afterlife effects of different species on decomposition rates, a powerful method in recent years has been to compare mass losses of (leaf) litters of multiple species by incubating them simultaneously in semi-natural outdoor -common-garden experiments’, particularly in litter beds. Species-specific -decomposability’ thus derived integrates several structural and chemical traits of the leaf (or other plant part) because it is an expression of the quality of litter as a substrate for microorganisms. Decomposability is usually related to leaf dry-matter content, leaf toughness, as well as nitrogen (N) and lignin content, in most studies; additionally, it has been found to be related to SLA, leaf pH, tannin, phosphorus (P) or base-cation content in others.

What and how to collect

Here, we focus on leaf litter, although the protocol can also be applied to other plant parts with some adjustments (see under Notes and troubleshooting tips below). Freshly senesced, undecomposed leaf litter should be collected from mature plants in the field. In species that shed their litter, it can be either collected from the ground within a few days after falling or by placing a clean cloth or net beneath the tree or branch and gently shaking it until senesced leaves fall. It is important to brush or rinse-off any soil before further processing. In species that retain dead leaves on plants or die back completely above ground, cut off leaves that are subjectively judged to have died very recently and are still undecomposed. Often such dead leaves are still shiny and, in deciduous woody species, may still show bright autumn colours. Petioles and rachides of compound leaves that are shed as an integral component of the leaf litter should be collected and processed as such (but see discussion under Specific Leaf Area). In aphyllous species, where the entire shoot functions as the green photosynthetic unit analogous to leaves and also senesces as a unit, such units are collected as leaf litter. In leaves that gradually die from the tip down, as in many monocotyledons, collect those leaves in which the middle lamina section is at the right phase, i.e. complete senescence without any evidence of decay. For species in which leaves senesce sequentially in cohorts, we recommend collecting several times from the same plants, to get representative leaf litter.

Litter collections should be air-dried in open paper bags until they reach their equilibrium moisture content. To preserve its characteristics, litter must never be dried at high temperatures. Once dry, the litter can be stored in the same bags for up to several months in a relatively dry environment away from sunlight. For each species, an air-dried subsample of leaf litter is weighed, and again after 48 h in an oven (60∘C), so as to calculate initial oven-dry weights of the samples for incubation. There are no fixed rules regarding litterbag size, mesh type or mesh material, but litterbags should be made of non-degradable, inert but flexible materials. Typical litterbags measure from 10 x 10 cm to 20 x 20 cm and are made of 1-mm polyester or fibreglass mesh. Litterbag sizes may vary within one study, so as to standardise the -relative packing’ of litter inside the bags for morphologically contrasting species. Finer mesh size should be used when, among the litters to be compared, narrow-leaved species are included, whereas wider mesh sizes allow a more complete set of organisms to be involved in decomposition and have less effect on the litter microclimate. Comparing some of the same species at different mesh sizes will help calibrate among methods. A litterbag usually contains a standard small amount (e.g. 1 g) of dry litter; however, for some species, or in some environments, it may be necessary to increase or decrease the initial mass per litterbag. Very big leaves may have to be cut into sections, with representative proportions of midrib and petiole, whereas flexible long monocot leaves can sometimes be rolled up (if not, better cut them into segments). If there are large differences in initial mass among some species, we recommend incubating some reference species at two or three different initial masses, for calibration among species afterwards. It is important not to break the leaf litter during handling. Filling the bags using funnels or tubes inserted into the bags temporarily may help here. Litterbags can be sealed with polycarbonate glue, by sewing (with nylon thread), stapling (with non-rusting staples) or by using a laboratory heat-sealer. Make sure a resistant label (e.g. plastic, with code embossed) is firmly attached to the litterbag or sealed inside.

Litterbags are incubated in a purpose-built outdoor litter bed. Litter beds can range from just a rather homogeneous square in the field, cleaned from vegetation and litter, with litterbags simply on the soil surface, to a much more elaborate bed, made by wooden or plastic squares (with natural drainage) filled with soil thoroughly mixed with a standard or combined litters, and covered with the same litter mixture (Fig. 1). Depending on the type of study, the composition of this mixture may be based on a particular community or several communities; however, a more standardised mixture not based on local communities may be used for particular purposes (see below). In any case, the composition should be homogeneous across the bed, to prevent differences in decomposition rate caused by the microenvironment. To further account for environmental gradients within larger beds, it is recommended to divide the bed in equal statistical blocks, with one replicate of each species in a random position in each block. The litterbags are usually incubated 1-2 cm below the surface of this mixture, to reduce heterogeneity in moisture dynamics among the samples. Additional control samples of some of the species may be treated identically, and retrieved immediately after burial to control for loss or ingression of particles during burial. Spraying the samples with demineralised or rain water before incubation will get them to field capacity more quickly. Stretching 3-5-cm-mesh nylon net or a metal grid over the bed may protect the samples from the activities of mammals and birds. Additional litterbags filled with pieces of plastic broadly representing litter amount and shape can be incubated during the whole period to check for the contribution of exogeneous organic matter to the sample. Retrieval dates and sampling schedule may vary, first, according to the microclimatic conditions that will determine decomposition rates and, second, to the average litter quality. In moist tropical environments, almost 90% mass loss can be reached in less than 2 months, given high litter quality, whereas in arid or cold environments, 2 years may be the minimum time needed for over 50% mass loss for the same litter quality. Two retrieval dates are usually enough to check for the consistency of decomposability ranking across species over time, whereas five or more may be needed if decomposition dynamics are to be analysed too. After retrieval, samples may either be cleaned up and processed directly, or first frozen. Adhering soil, soil fauna and other extraneous materials must be removed from the decomposed litter, to the degree possible using e.g. tweezers and small brushes (Fig. 1). Litter samples are then oven-dried for 48 h at 60∘C, then weighed. Decomposition rate can be defined as the percentage of mass loss after the incubation period or as k (decomposition constant) derived from a presumed exponential mass-loss curve over time involving more than one harvest, as follows: 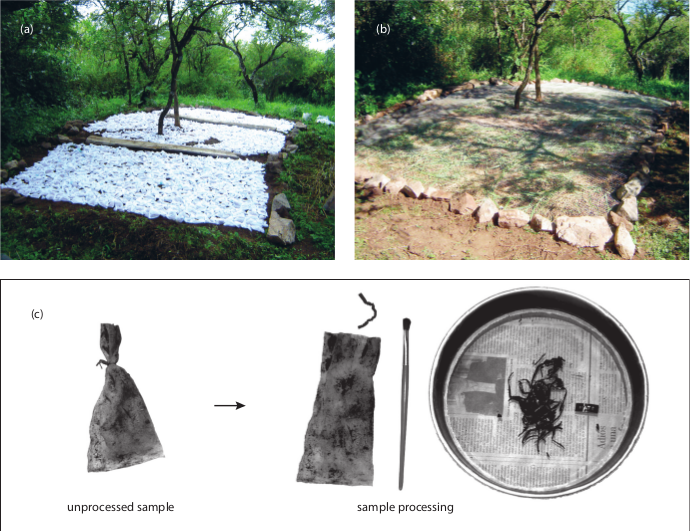 A disadvantage of the litter-bed assay is that the incubation environments and periods vary greatly, so that mass loss or k values can be compared directly only within but not between studies or sites. We advocate the establishment of one or a few centralised litter beds, which could simultaneously host samples from multiple sites. It would be better still if such litter beds, or equivalent -common garden’ facilities, could provide close to standardised environmental conditions from year to year, e.g. in a controlled environment greenhouse. In the absence of such facility, we recommend (1) additional inclusion of a few species from each range of sites in a multispecies litter bed, so as to be able to calibrate mass-loss values across multiple sites, and thereby across multiple species from these sites or (2) inclusion of litter samples of a few reference species in multiple litter beds across sites.

(1) Microcosms. Although most litter beds are situated under field conditions, litterbags can also be incubated in microcosms when more detailed effects of soil and litter fauna or leaching is studied, or when the researcher needs to standardise the incubation conditions for any other reason. As in common-garden experiments, microcosms can be sampled at certain time intervals during the process of decomposition, and the incubated material can be analysed for its mass loss, chemical changes and biological colonisation.

(2) Contamination When sand or clay contamination is high, even after removing obvious extraneous matters, the sample can be oven-dried and then sieved to remove bulk of the sand or clay fraction. If contamination is too high and difficult to eliminate, the incubated litter sample can be ashed for 4 h at 450∘C, and the mass loss expressed on the basis of the ash-free mass (%) of the initial and final litter samples (this is not appropriate for soils high in organic matter).

(3) Photodegradation. One should be aware that in some dry or windy environments with high irradiance, mass loss resulting from photodegradation or sand abrasion (in addition to microbial decomposition) may be substantial and this may affect the species rankings of mass loss in incubations under exposed conditions or below a litter layer. Species differences in photodegradation at a given exposure may themselves be of interest.

(4) Litter decomposabilities of other organs (fine and coarse roots, fine and coarse stems), and the extent to which these are coordinated between organs across species, are also of great ecological relevance. A new method is available to include coarse woody debris together with fine litter in such comparative common-garden studies, taking into account differences in size and time scale of decomposition.