The light sensitive film (Optleaf, Taisei E&L, Tokyo, Japan) fades and changes the transmittance of light in proportion to the amount of accumulated light absorbed, with maximum absorption wavelength of 521 nm. The applicability and limitation of using this film are probably similar to those of traditional diazo paper methods (Friend 1961, Bardon et al. 1995), although effects of sunflecks have not been evaluated so far. Because of the simple methodology, various recent studies have used this film to investigate light environment (Hikosaka et al. 2001, Osada et al. 2001, 2002, Osada et al. 2004a, Osada et al. 2004b, Onoda et al. 2007, Osada et al. 2010).

Step 4 Attach the film pieces on the surface of individual leaves (or places of measurements) by using clips, staples, or double-sided adhesive tapes (Fig. 1)

Step 5 Check the number of film pieces and their positions, i.e. which piece was set to each position of measurement

Step 6 At the same time, several film pieces and quantum sensors with data loggers are set at the positions of various light environments (from open places to shaded places) to construct calibration equation

Step 7 Wait about 3-7 days, depending on climate, ambient temperature, and light environments

Step 8 Collect the film pieces and quantum sensors, and keep the pieces in dark places such as in small envelopes, and bring them back to the lab 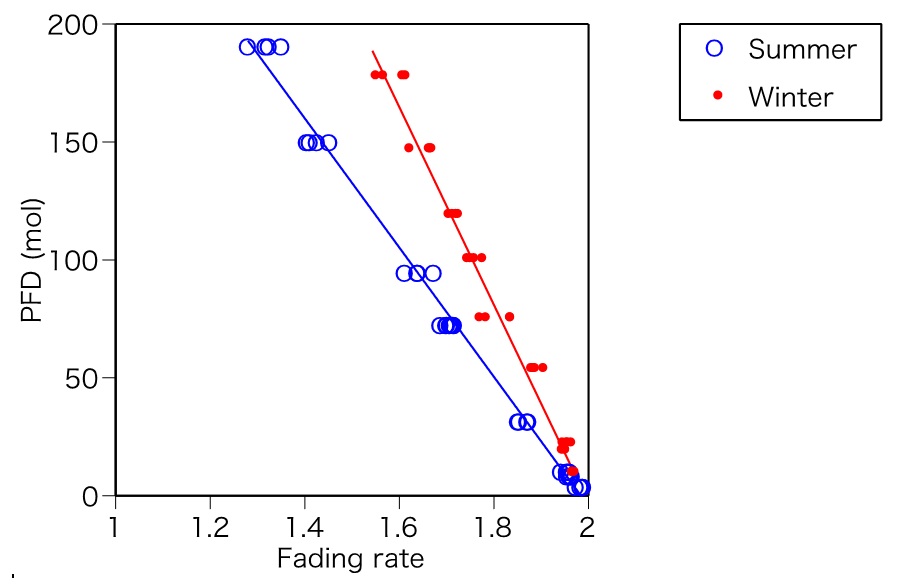