SOC is the largest terrestrial C store and its dynamics are important for understanding the global carbon cycle. In addition, SOC is the main source of energy for soil microbes and, therefore, the amount of SOC will influence the availability of essential plant nutrients. One of these essential nutrients, N, is required in relatively large concentrations for plant growth and its availability can limit vegetation distribution.

Both SOC and organic N form part of the soil organic matter (SOM) pool which is derived from plant (including leaf litter and roots), animal and microbial residues. SOM is a complex mix of chemical compounds that undergo decomposition, mediated by microbes, at different rates depending on the amount of physical and chemical stabilization afforded by the soil mineral matrix and the inherent chemical recalcitrance of the organic material (Krull et al. 2003). SOC is generally considered to comprise ~50% of SOM (Pribyl 2010) while almost 95% of soil total N (STN) is closely associated with SOM (Schulten and Schnitzer 1998).

SOC consists of a range of compounds from simple monomers to complex biopolymers and charcoal, which are often defined by their decay rates and classified into -fast’, -stable’ and -inert’ turnover pools (Krull et al. 2003). STN consists of both organic N compounds (heterocyclic N compounds, proteinaceous material, amino acids, amino sugars) and inorganic N (ammonium, nitrite and nitrate) (Schulten and Schnitzer 1998). Analysis of SOC may be performed on whole soil samples or fractions that separate pools of SOC which decompose at different rates e.g. micro-aggregate protected C. A different set of procedures may be performed for separation of soil N into different plant available fractions (Rayment and Lyons 2011), but these will not be described further in this protocol.

The methods described in this protocol for analyzing STN and SOC relate to nutrient analyses on dry soil samples, and in some cases are not suitable for analysis of other soil nutrients. Our protocols relate to methods commonly used in Australia but we refer to alternative methods where necessary.

Key equipment for soil sampling and analysis include: 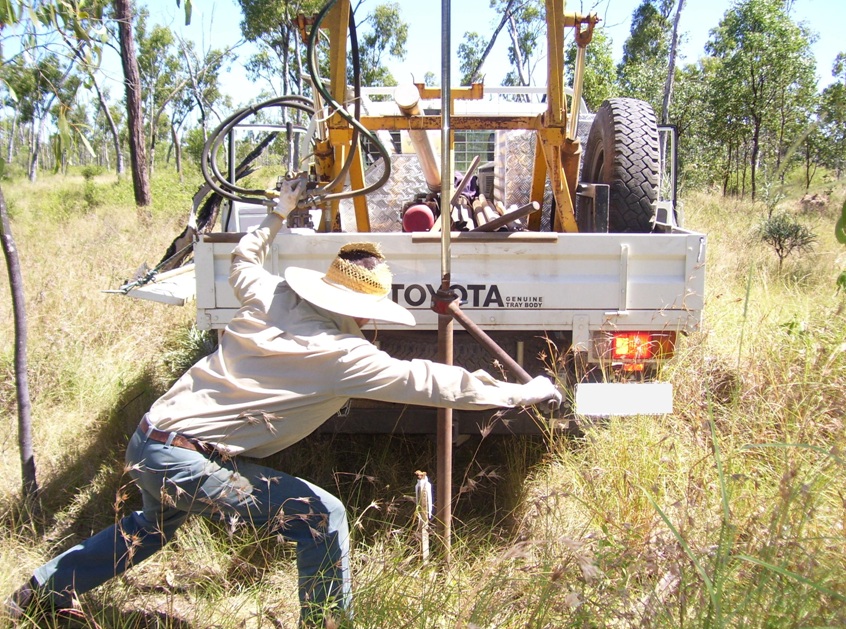 Figure 1. Field sampling of soil using soil coring tubes, driven by a hydraulically operated rig mounted on the back of a vehicle (Photo: D. Allen).

1. When and where to sample

The number of soil samples needed to obtain an accurate measurement of SOC and STN will depend on the variation in these properties across sites or strata, and the purpose of the sampling undertaken. Soil may be collected as individual or composite samples, with sampling locations throughout the landscape determined in random, systematic, or stratified collections; sampling design, including analysis may utilize classical- and geo-statistical methods (Carter 1993; Allen et al. 2010; Cobo et al. 2010; van Wesemael et al 2011). It is also preferable, when collecting soil samples in the field, to georeference the sample locations using a GPS (or differential GPS where available) to enable spatial comparison of results and allow integration of information into national soil mapping projects.

Generally soil samples are taken at the end of the growing season, and if the aim of the study is to detect temporal changes in nutrient levels then it is important to keep the timing of sampling consistent. It is possible that STN (Vitousek and Field 2001) and SOC contents may change across seasons and several sample time points may be needed. For example, in shrink-swell clay soils the time of sampling is critical as soil volume can change dramatically as soils dry.

Soils are generally sampled to a fixed depth. In Australia 30 cm or bedrock (whichever is first) is the standard reporting depth for SOC stocks under the National Greenhouse Gas Inventory guidelines (McKenzie et al. 2000). This is similar to the minimum sampling depth generally recommended by the Intergovernmental Panel on Climate Change (IPCC 2006). While variation in sampling protocol exists, e.g. core or pedon sampling methods and sampling depth intervals, comparison between soils is usually based on the same soil thickness or volume (Lal et al 2001). In some cases soil samples are taken to deeper depths than 30 cm in order to determine deep nutrient stores or for recalculating soil nutrient stocks to an equivalent soil mass basis (see step 5).

The amount of soil sampled from each soil pit depends on the equipment used (see materials section, Figure 1), but an adequate volume (e.g. minimum 5 cm diameter core) is required. Often samples are collected in depth increments, for example: 0-5, 5-10, 10-20, 20-30 cm.

In order to adequately interpret data collected from soil samples it is important to collect other information about a sample site including vegetation description, soil description (texture, colour, field pH etc) and bulk density. See the Australian Soil and Land Survey Handbook for further details (The National Committee on Soil and Terrain 2009). Soil bulk density is the most important additional measurement required at each site when sampling for SOC and STN.

Soil bulk density is used to convert SOC and STN concentrations to stocks. Soil bulk density can be determined by several methods, including vertical or horizontal ring or clod sampling, fluid displacement or refractory methods (Lal et al 2001; Sanderman et al. 2010) (Figure 2). In all cases it is important that bulk density samples are taken at regular depth increments and usually to a deeper depth than the standard to aid in recalculation of SOC and STN content to a soil mass basis. Soil bulk density measurements need to be made carefully to ensure that soil is not compacted during sampling (important for ring sampling techniques) and soil is not lost before processing. 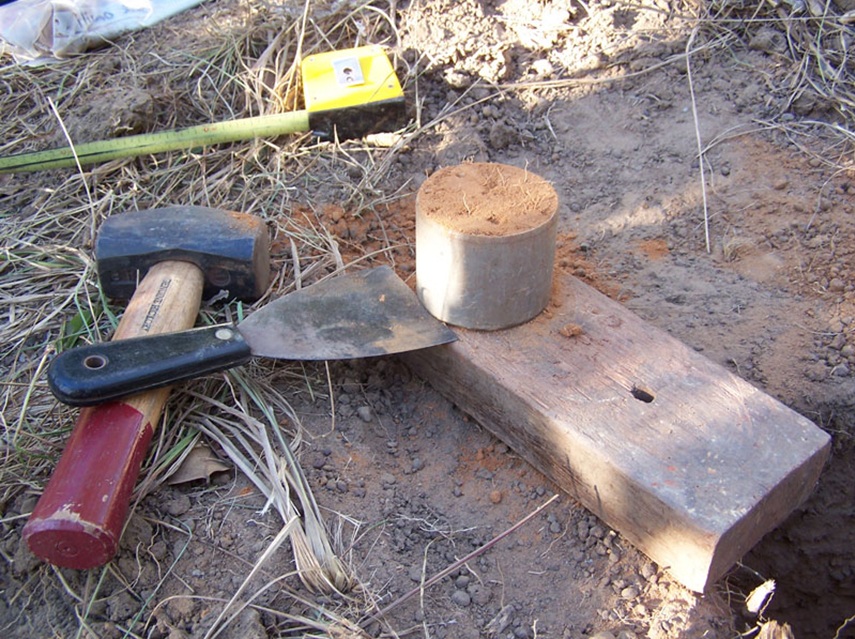 Soil samples are generally placed into strong plastic bags that can be sealed tightly with minimal air space. If sampling for long periods in the field it is important to store the samples in a cool place, such as a fridge, or immediately air dry the samples to prevent breakdown of organic matter. A label on the outside of the bag and one on carbon-free paper inside the bag is also good practice. Once samples have returned to the laboratory they need to be dried by either air drying in a dust-free environment at ca. 40∘C or oven drying (60-70∘C; note temperature should not exceed 80∘C (McKenzie et al. 2000)).

Bulk density samples must be dried at 105∘C in metal trays before weighing. If bulk density samples contain a large amount of gravel, fine earth bulk density is calculated by first removing any gravel that remains on a 2mm sieve. The weight of the gravel is taken off the final soil weight before dividing by the sample volume. Alternatively, gravel bulk density is determined via displacement and subtracted from whole soil bulk density (see Lal et al 2001 Chapter 3 for calculations).

Following drying, samples for SOC and STN analysis are sieved (2mm size sieve) to remove gravel and other material including coarse roots, charcoal and iron-manganese nodules. The >2mm soil fraction is stored separately to the <2mm soil fraction and can be analysed at a later stage for SOC and STN if required. At this stage different C fractions can also be analysed, including density fractions (such as the light fraction <1.6 g cm-3), particulate organic C (usually particles >53 μm), charcoal and soil aggregates (Allen et al 2010). Further processing (such as fine-grinding of samples <0.25mm) is required for SOC and STN analysis. Thorough mixing of soil is necessary to ensure representative sub-sampling of soils for analysis; a sample splitter will assist this process.

An important consideration for alkaline soils is the presence of carbonates, which need to be removed prior to analysis of SOC. Generally hydrochloric or sulphurous acid is used for this purpose (Fernandes and Krull 2008; Walthert et al 2010).

Several methods are available for SOC and STN analysis, including dry combustion (e.g. Dumas) and wet-chemical (e.g. Walkley-Black C, Kjedahl N) methods (see Carter 1993; Bisutti et al 2004; Sanderman et al. 2010; Rayment and Lyons 2011 for comparative discussion of the methods). The dry combustion method is a commonly adopted technique since it may combine both C and N analyses in one instrument (e.g. LECO CNS-2000 carbon, nitrogen and sulfur analyser). Spectroscopic methods (mid infra-red reflectance (MIR), near infra-red reflectance (NIR)) are also being investigated for their application to SOC and STN analyses (Gehl and Rice 2007; Cobo et al 2010). Within sample replication during laboratory analyses is important to obtain an estimate of analytical error.

where D is soil depth (cm) and is soil bulk density (g cm-3). Bulk density is:

where W is the weight of soil (g) in a known volume (V, cm-3). If the soil sample contains many coarse fragments and gravel then fine earth bulk density is used instead (McKenzie et al. 2000). These same calculations are also used for STN stocks. All SOC and STN stocks should be expressed on an oven dry weight (105∘C) basis. 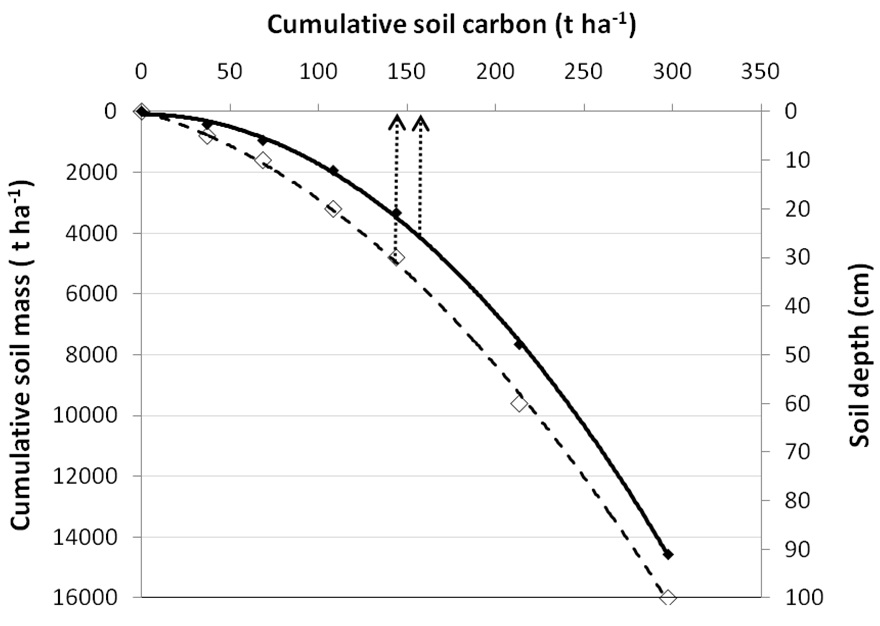 Bisutti I, Hilke I, Raessler M (2004) Determination of total organic carbon – an overview of current methods. Trends in Analytical Chemistry 23, 716-726.

Fernandes M, Krull E (2008) How does acid treatment to remove carbonates affect the isotopic and elemental composition of soils and sediments Environmental Chemistry 5, 33-39.