The dynamic nature of the rhizosphere-soil structure complex createsa mosaic of physicochemically varying microenvironmentsin the soil. Microorganisms preferentially colonize the rhizosphere because root exudates (i.e., sloughed cells, secretions and exudates) are a major source of nutrients in soils, making the rhizosphere an area of intense activity with specific biological, chemical, and physical characteristics(Lynch and Whipps, 1990; Kennedy, 1998). Microaggregates formed in the rhizosphere are stabilized by intimate contact with clay, organic materials, and amorphous inorganic components (Turchenek and Oades 1976). Outside the rhizosphere, microaggregate formation is influenced by i) microbially-produced polysaccharides which bind minerals and ii) the direct interaction of organic materials with inorganic colloids.

2. Ideally, store soil cores at 4∘C until they are separated into rhizosphere and non-rhizosphere soil.

4. Divide the soil core into smaller subsections that run from the soil surface to the bottom of the core.

5. Working one subsection at a time, grip the exposed part of the plant shoots and then shake the mass of roots and soil over a large bin.

6. Repeat Steps #3-5 for remaining subsections of a soil core.

8. Once collected, store rhizosphere and non-rhizosphere samples at -20∘C until the physical fractionation process.

Microaggregate isolator assembly; Please refer to Figure 1, -Microaggregate Isolator Components Diagram’ and images (Figs. 2-6) below for a visual guide to the assembly of parts and connections

11. Connect the 5/8 inch diameter piece of Tygon tubing to the funnel of the isolator, clamp the tubing to a stand and make sure that the height of the arc of the tubing is level with a height 2 cm above the 250 μm sieve; Rest the end of the 5/8 inch Tygon tubing on the 53 mm sieve + receiver pan (53 m sieve assembly; Figure 6).

13. Turn on DI water and start flow of water into the isolator unit by turning the open-close knob on the valve (Part #6). If necessary, increase or decrease the water flow in order to have a slow but stable water flow through the isolator, by adjusting the knob on Part #6 or Part #8 (it is not advised to change the flow of water at the DI water faucet).

14. Fill isolator with DI water to 2 cm above the 250 μm sieve screen in the column assembly. The water level should remain at this level and the excess water should be flowing from the 5/8 inch Tygon tubing into the 53 μm sieve assembly. Check to see if the water level remains 2 cm above the 250 μm sieve screen by closing the valve (Part #6) to the DI water source.

15. With the valve closed (Part #6), add 50 glass or stainless steel beads (4 mm diameter) into the column/atop the 250 μm screen, resume the flow of water, turn on the reciprocal shaker to a low speed for several seconds, then shut off the reciprocal shaker. Check to see that the 2 cm head is stable/unaffected.

16. Once the 2 cm head and stable water flow has been achieved, cut off the water supply to the isolator by closing the valve (Part #6). Pour out the water collected in the receiver pan and immediately replace the 53 μm sieve assembly beneath the 5/8 inch Tygon tubing.

19. Add ~20g non-rhizosphere or ~25-30g rhizosphere soil subsamples into the microaggregate isolator column and place the lid on the column assembly.

20. Start water flow through the isolator by opening valve on Part #6 and turn on the shaker to a low speed (~150 rpm). Shake the device until water flowing out of the device onto the 53 μm sieve is clear and all aggregates on top of the 250 μm screen are broken up (check by removing the lid and looking into the column).

21. Stop the water flow to the isolator (closing Part #6) and turn off the DI water faucet.

22. Rinse off the sides of the column with DI water in a squirt bottle.

25. Manually sieve the material left on the 53 μm sieve for two minutes by moving the sieve 50 times, in an up-and-down motion, with a slight angle to ensure that water and small particles go through the mesh (Elliott, 1986; see link to video protocol in -Other resources’ below).

26. Transfer water and particles that went through the 53 μm sieve into a 2 L beaker (if not processing biophysical microenvironments for biological variables, then see Notes below).

28. Add appropriate amount of flocculant to the sample with a pipetman and let solution stand/flocculate for 15 minutes.

30. Remove rubber stopper and using a squeeze bottle with DI water or similar set-up, run water through device to rinse material and beads onto a 250 μm sieve and transfer this material to a pre-weighed specimen cup for the coarse particulate organic matter (>250 μm material).

31. Again, using a squeeze bottle with DI water, transfer the microaggregates on the 53 μm sieve into a pre-weighed specimen cup.

32. After 15 min of flocculation, transfer the silt-and-clay solution into centrifuge bottles (using as little DI water as possible).

33. Balance the centrifuge bottles and centrifuge the samples at 5,000 RPM (or equivalent RCF) at 4∘C for 15 minutes.

34. Decant the supernatant and consolidate the pellets into fewer bottles.

37. Store all samples in specimen cups in -20∘C freezer until further analysis. 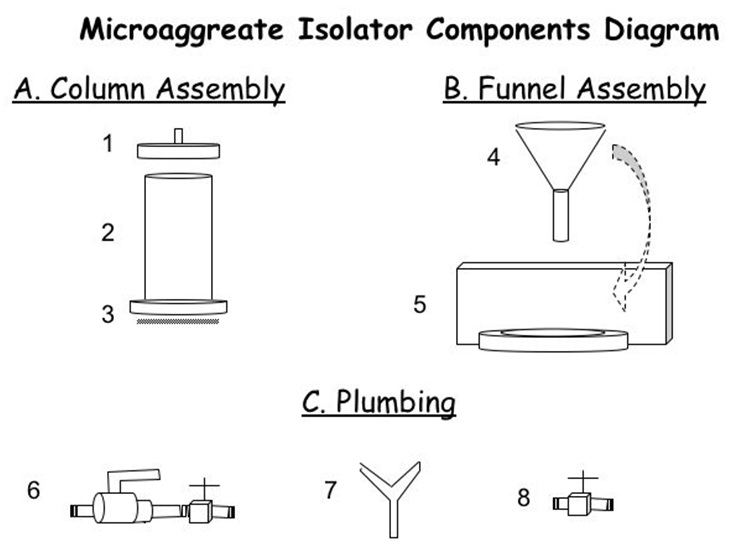 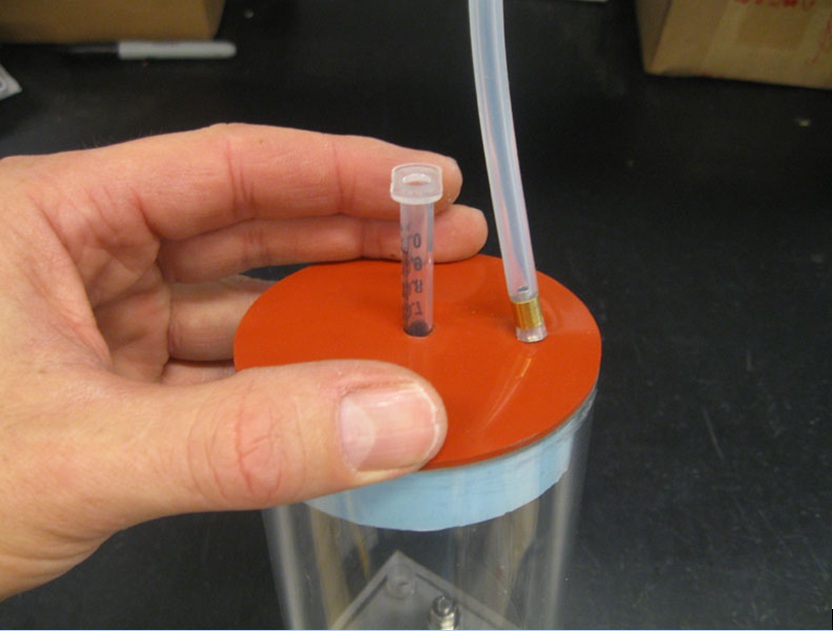 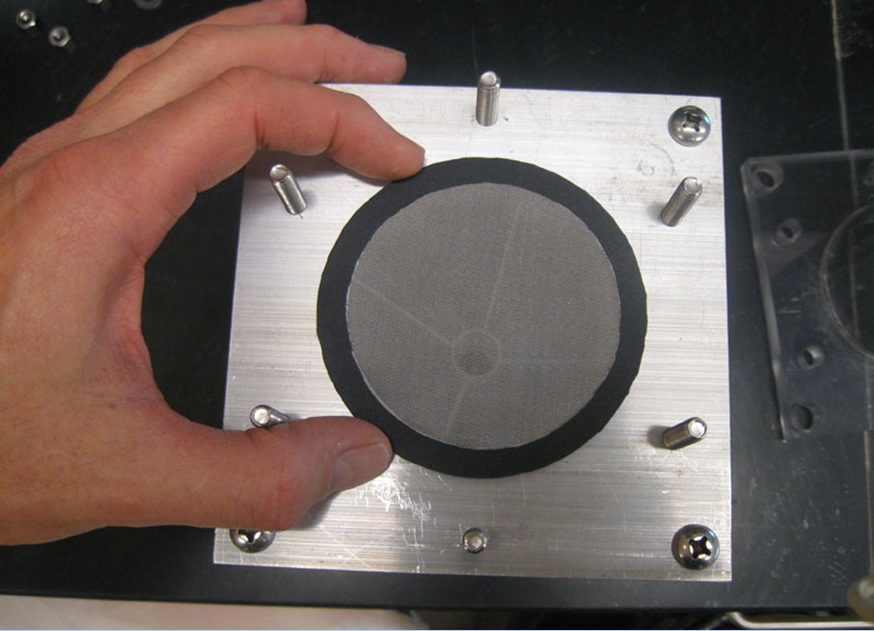 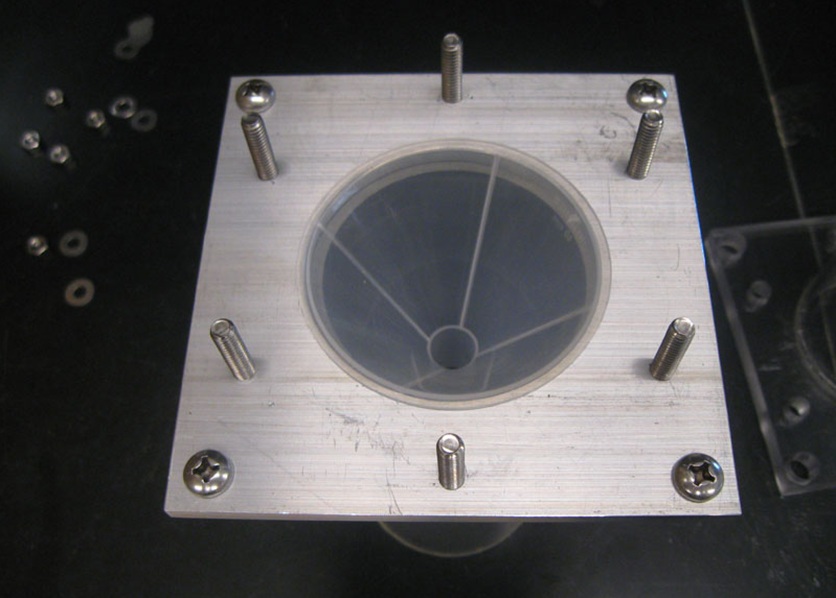 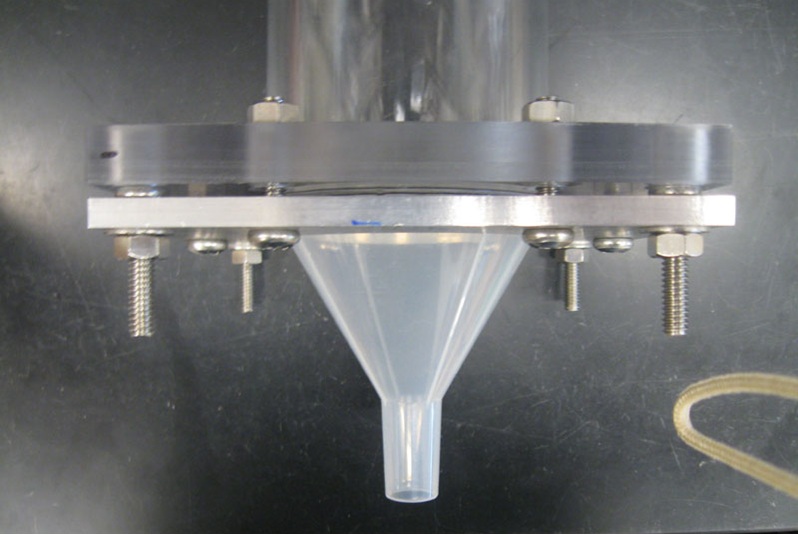 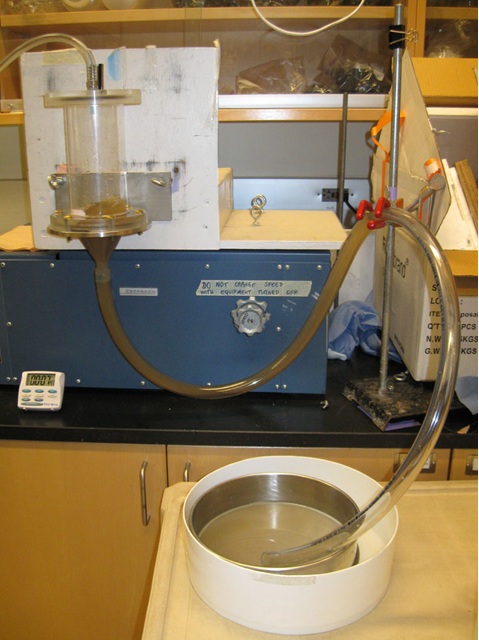 Figure 6. Column Assembly plus Funnel Assembly connected via 5/8 inch Tygon tubing to the 53 m sieve assembly (53 μm sieve + receiver pan). Note that lid of the Column Assembly shown here is a variation of the lid shown in Figure 2.

– Instructional video of sieving procedure used to separate microaggregates from the silt-and-clay particles after microaggregate isolation:

– A video protocol for the complete microaggregate isolation procedure can be found here: 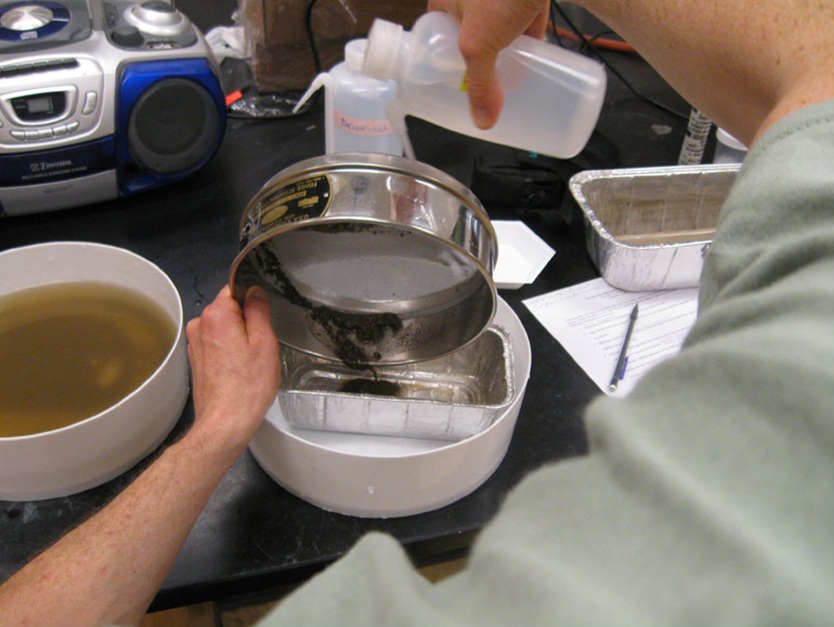 Barthes B, Roose E (2002) Aggregate stability as an indicator of soil susceptibility to runoff and erosion: validation at several levels. Catena 47, 133-149.