This article is modified from Pérez Harguindeguy et al. (2013). The “New handbook for standardised measurement of plant functional traits worldwide” is a product of and is hosted by Nucleo Diversus (with additional Spanish translation). For more on this trait and on its context as part of the entire trait handbook visit its primary site Nucleo DiverSus at http://www.nucleodiversus.org/?lang=en

Flammability-enhancing traits are important contributors to fire regimes in (periodically) dry regions and therefore they have important ecological impacts (particularly on ecosystem dynamics), as well as socioeconomic and climatic consequences. The intrinsic flammability of a plant depends on both its traits while alive and the effects of its leaves, branches, and stems after those organs’ deaths. The flammability of those organs (either living or dead) depends on (1) the type or quality of the tissue, and (2) the architecture and structure of the plant and its organs (which is mainly related to heat conductivity).

Note that the flammability of a given species can be overridden by the flammability of the entire plant community (e.g. amount of litter, community structure and continuity, organic matter content of the soil) and by the particular climatic conditions (e.g. after a long very dry period, many plants would burn quite independently of their flammability).

Flammability (broadly defined as the propensity to burn) is a compound plant functional trait. Its components vary among authors and disciplines. Most studies are based on flammability measurements of small plant fragments in chambers in the laboratory. Although this produces highly standardised results, it does not scale up well to whole-shoot flammability. We propose a standard method for measuring flammability in which the basic architectural arrangement of the measured shoots is preserved (see More on methods in the reference section, and Fig. 1 for illustration) This involves a low-tech device in which shoots up to 70 cm long are placed, preheated and ignited in a standard way, then the following measurements are taken:

(1) maximum temperature reached during burning (in ∘C, MT), measured with an infrared thermometer from a distance of 50 cm to the burning shoot;

(2) burning rate (BR), a value obtained by dividing the length of the sample that was burnt by the burning time (in seconds); it gives an idea of how quickly flames can spread across the plant and to what extent the plant is able to carry fire; and 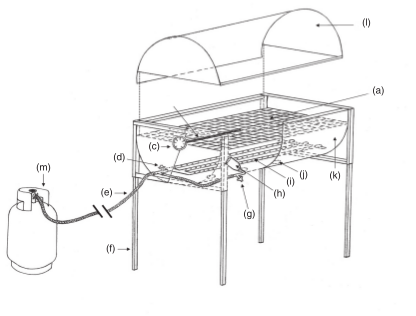 For calculating (overall) flammability, the scores on each component must be transformed to a proportional scale, with the value 1 being assigned to a reference value. In the case of BB, the value 1 was assigned to the maximum possible value for this component (i.e. 6), whereas for the other components, the reference value was based on the literature and the results of our experiments. Reference values are: MT=500∘C; BR = 1 cm-1Standardised MT, BR and BB scores are then added to obtain a compound value of flammability (rounded to two decimals) that could vary between 0 (no flammability) and ~3 (maximum flammability).

As an alternative to the direct measurement of flammability, an estimation may be obtained by measuring several plant attributes that are known to influence plant flammability. Five classes are defined for each of the attributes described below (stem and twig water content, canopy architecture, surface : volume ratios, standing litter, volatile oils, waxes and resins). Flammability is subsequently calculated as the average (rounded to one decimal) of the class scores for each of the following individual attributes (see Table 1 for ranges of values of each attribute within each class). We strongly recommend testing and calibrating this estimation against direct measurements of flammability as described above, or against direct measurements of ignitability and combustibility as described under Notes and troubleshooting tips below.

(1) Water content of branches, twigs and leaves Flammability is expected to be greater in species with higher leaf dry-matter content (see Leaf Dry Matter Content for protocol) and higher twig dry-matter content and it is probably also a function of drying rate (here, represented inversely by drying time from saturation to dry equilibrium).

(3) Surface-to-volume ratios Smaller twigs (i.e. twigs of smaller cross-sectional area) and smaller leaves should have a higher surface-to-volume ratio (and, thus, faster drying rate) and therefore be more flammable. Since twig and leaf size tend to be correlated in interspecific comparisons, according to allometric rules, we use leaf size here to represent both traits. A complication is that some species are leafless during the dry season; however, leaf litter is likely to still be around in the community and affect flammability during the dry season (see Comparing leaf area across species). However, for ground fires, substantial accumulation of litter of small leaves may pack densely, obstructing oxygen flow and actually strongly inhibiting fire to spread.

(5) Volatile oils, waxes and resins in various plant parts contribute to flammability. This is a subjective, categorical trait ranging from -none’ to -very high concentrations’. Check for aromatic (or strong, unpleasant) smells as well as sticky substances that are released on rubbing, breaking or cutting various plant parts. Scented flowers or fruits are not diagnostic for this trait.

(1) Ignitability indicates how easily a plant ignites (i.e. starts to produce a flame). It can be measured directly by measuring the time required for a plant part to produce a flame when exposed to a given heat source located at a given distance. Ignitability experiments are usually performed several times (e.g. 50), and the different fuels are ranked by taking into account both the proportion of successful ignitions (ignition frequency) and the time required to produce flames (ignition delay). Tissues producing flames quickly in most of the trials are ranked as extremely ignitable, whereas tissues that rarely produce flames and/or take a long time to produce them are considered of very low ignitability. These experiments are run in the laboratory under controlled conditions (moisture and temperature) by locating a heat source (e.g. electric radiator, epiradiator, open flame) at a given distance (few centimetres) from the sample. The values used to rank species according to ignitability depend on the type and power of the heat source, on the distance of the heat source to the sample, on the shape and size of the samples and on the relative humidity of the environment in the days before the test; these experimental conditions should be kept constant for all trials and samples. We propose using an open flame at 420∘C, placing the plant material at 4 cm from the flame. A standard quantity of 1 g of fresh material is being used.

(2) Plant tissue heat conductivity (combustibility) can be assessed by the heat content (calorific value, kJ g-1), which is a comprehensive measure of the potential thermal energy that can be released during the burning of the fuel. It is measured with an adiabatic bomb calorimeter using fuel pellets of ~1 g, and the relative humidity of the environment in the days before the test should be standardised as well. Evidence shows that heat content varies relatively little among species and is only a modest contributor to interspecific variation in flammability.

(3) Combustibility and structural variables In relation to the surface area-to-volume ratio, other structural variables have been used to characterise the combustibility, especially the proportion of biomass of different fuel classes (size distribution). Typically, the fuel classes used are the biomass fractions of (1) foliage, (2) live fine woody fuel (<6-mm diameter; sometimes subdivided in <2.5 and 2.5-6 mm), (3) dead fine woody fuel (<6 mm), and (4) coarse woody fuel (6-25, 26-75, >75 mm). The summed proportion of live and dead fine fuels (foliage and woody of <6 mm) may be the best correlate of overall surface area-to-volume ratio.

(4) Fuel bulk density (= fuel weight/fuel volume) and canopy compactness (ratio of fuel volume to canopy volume) have also been used to characterise heat conductivity, mainly at the population and community levels. Furthermore, high litter fall and low decomposition rate will increase the combustibility of the community.

for flammability of whole shoots described above, see: