The majority of herbacous species are clonal to some degree, i.e. they are able to multiply by vegetative means and thus spread their descendants. Similar to non-clonal plants, the individuals of clonal plants (or ramets) are recognized as individual shoots, which often have their own appending roots. Clonal plants however differ from nonclonal plants since they have buds that develop from an extistent individual into a horizontally spreading stem or root axis, from which new individuals may develop at other locations. This principle of vegetative multiplication may, in theory, be repeated endlessly, and clones of clonal plants may thus occupy or colonize large areas. Clonal growth determine to a large extent the dynamics of populations and whole (herbaceous) communities, but is still often overlooked.

Clonality can thus defined as the ability to produce potentially independent ramets. Clonality is a morphologically very diverse trait which cannot be expressed as a simple value but rather as a set of traits including parameters like multiplication rate, lateral spread and persistence of connections among ramets. Although these traits help to characterize the clonal growth of a species, it is not easy to standardize the method for all species. The problem is complicated by the considerable morphological diversity between plants, plasticity of vegetative growth in relation to plant age, seasonal development and environmental conditions, and by the fact that a lot of species have several possibilities of growing clonally and they may use none, one or all in different conditions. This protocol provides a basic method which has been tested on more than 3 thousand plant species in Central Europe.

A large amount of jargon has developed to describe clonal growth forms. Below, a list and explanations are provided for such jargon.

How to collect traits of clonal growth (general comments)

Dig up several well developed plants and select mature and older individuals out of them, on which below-ground stem structures are well developed (large inter-connected systems of ramets, etc.) and which flower/set fruits regularly. The best time for collecting information of traits is at flowering or fruiting time, usually at the end of the growing season. In the case of very large interconnected systems partial excavation is sufficient.

The plant organs providing buds for re-growth of new shoots which may become independent on mother shoots are called organs of clonal growth (CGO). In the literature there may be found great diversity in terminology (see Table 1 and ‘Units, terms, definitions’ above).

To determine CGO, careful examination of the whole inter-connected clonal fragment is usually necessary, either in the field or in a laboratory. In plants combining several modes of clonal growth (see Figs. 1, 2) inspection of a few plants is often not sufficient because some clonal growth modes are utilised in special situations only (they may be classified either as necessary, additive or regenerative). Therefore, it is worth covering a broad as possible range of habitat conditions in which particular species naturally occur. Continue according to the determination key in the next section. 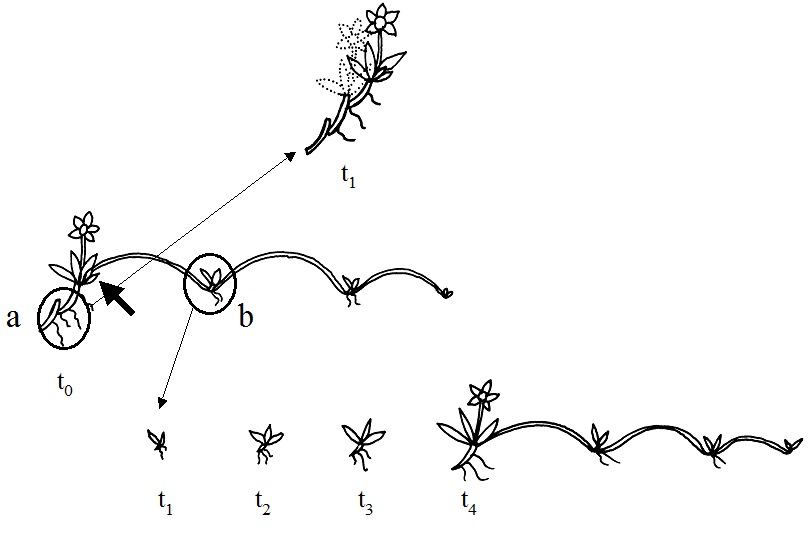 Fig. 1 – Growth of Fragaria viridis, a species with necessary and additive clonal growth organs (CGO). The epigeogenous rhizome is a necessary CGO and above-ground horizontal rooting stem (stolon) is an additive CGO. The epigeogenous rhizome is formed by perennial stem bases of sympodial shoots. The rhizome growing at the soil surface has shortened internodes and is gradually pulled into the soil by roots. Its youngest parts bear green leaves at the nodes. During the first year of its life the shoot corresponds to a rosette of leaves (arrow) (t0), its apical meristem modifies into an inflorescence in the second year. In the same year an offspring rosette arises from the axil of the uppermost leaf of the rosette. Generations of the shoots overlap and the plant flowers every year (t0 and t1; the dotted shoot was formed last spring and died last autumn). The above-ground rooting stem consists of several generations of offspring shoots which arose during one season. Their first internodium is always long and is followed by several short internodes. The spacer between offspring rosettes splits in winter. Offspring plants grow for several years (t1, t2,t3) as rosette shoots and produce their first stolons between the second and fourth year. The offspring usually flower in the fifth year of their life (according to Klimešová and Klimeš 2008). 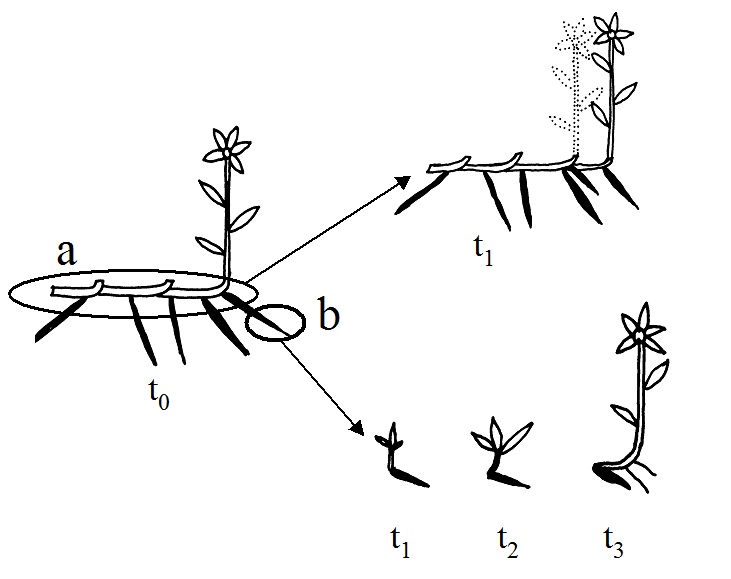 Fig. 2 – Growth of Geranium sanguineum, a species with necessary and regenerative clonal growth organs (CGO). The hypogeogenous rhizome is an necessary CGO (a), adventitious sprouting from injured roots function as an regenerative CGO (b). The hypogeogenous rhizome is formed by perennial bases of sympodially growing shoots (a). The bases are parts of shoots growing horizontally below the soil surface and bearing scale leaves. Above-ground parts of the shoots are non-rosette and annual, flowering every year (t0 and t1; the dotted shoot was formed last spring and died last autumn). Size of sprouts originated on root fragments are similar to those of seedlings. The shoots are replaced by sympodially growing new ones every year, producing hypogeogenous rhizomes with short increments. It takes several years (t1, t2, t3) before the new shoots flower for the first time (according to Klimešová and Klimeš 2008).

Despite the huge vareity of clonal growth, a number of comparative functional traits can be measured to compare different species.

Life-span of a shoot (shoot cyclicity)

The life-span of a shoot is the duration of a shoots life from the sprouting of a bud, through the growth, flowering and fruiting of the shoot, until its death. According to the number of seasons, the shoots are called monocyclic, dicyclic and polycyclic shoots. Observation of marked shoots over their life-span is the best and most reliable source of information about shoot cyclicity.

Persistence of connection between mother and daughter shoots

Individual clonal growth organs may differ in the persistence of connections between mother and daughter ramets. They either split after a short time (up to two years) into physically and physiologically independent units (splitters) or remain inter-connected for a long time (more than two years) (integrators). Persistence of the connection can often be estimated from its morphology: thickened spacers with remains of shoots, sheaths and bracts and woody structures often connect mother and daughters shoots over more than 2 years, and thin spacers without remains of shoots, sheaths and bracts are short-lived and connect mother and daughter shoots over less than 2 years.

This is a measure of the intensity of clonal multiplication. Values lower than 1 occur in shoots living for several years where branching takes place after flowering only. The value of 1 corresponds to the situation when a single daughter shoot replaces a mother shoot. Higher values refer to a successful multiplication, resulting in an increasing number of descendants. This trait can be estimated when mother shoots and its remains are preserved and daughter shoots are still connected to it. Otherwise, the evaluation is somewhat tricky on standing plants, and long term monitoring may then be considered an alternative.

A measure of lateral spread increment of clonal growth organ in the horizontal direction. It can be measured as the longest distance between the mother shoot and the tip of the daughter shoot after its growth is finished at the end of a season. 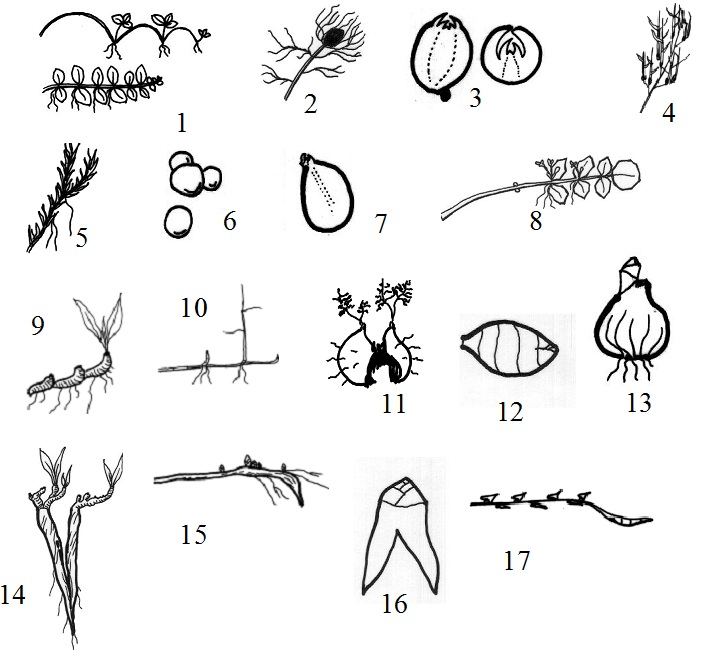