One of the main functions of soil is to act as a reservoir for holding water. In unsaturated soil, water is held in pores by a suction that is generated by capillary effects, namely the attraction between water and hydrophilic surfaces coupled with the surface tension at an air/water interface. For a cylindrical pore of radius r (m), the effect of this interaction on the suction in the water is given by

where P (Pa) is the drop in pressure across the meniscus, and is the surface tension of water, which is about 0.075 N m-1 in pure water at room temperature, so that P is approximately 0.15/r.

The suction enables the soil to hold water against the pull of gravity. The gravitational effect is given by wgh, where w (kg m-3) is the density of water, g (9.8 m s-2) is the acceleration due to gravity, and h (m) is the height (relative to a given reference) in the gravitational field. This relation means that the suction in the water increases by 9.8 kPa, or approximately 10 kPa, for every meter increase in height.

As an example, the meniscus in a cylindrical pore of radius 15 μm would have a pressure drop across it of 10 kPa. The suction, , in the water would therefore be 10 kPa if the surrounding gas were at atmospheric pressure (i.e., about 100 kPa). Water would therefore rise to a height of about 1 m in a vertical capillary tube of this size, or, more generally, to a height of 15 x 10-6/r m.

The following figure illustrates how the capillary equation is derived: 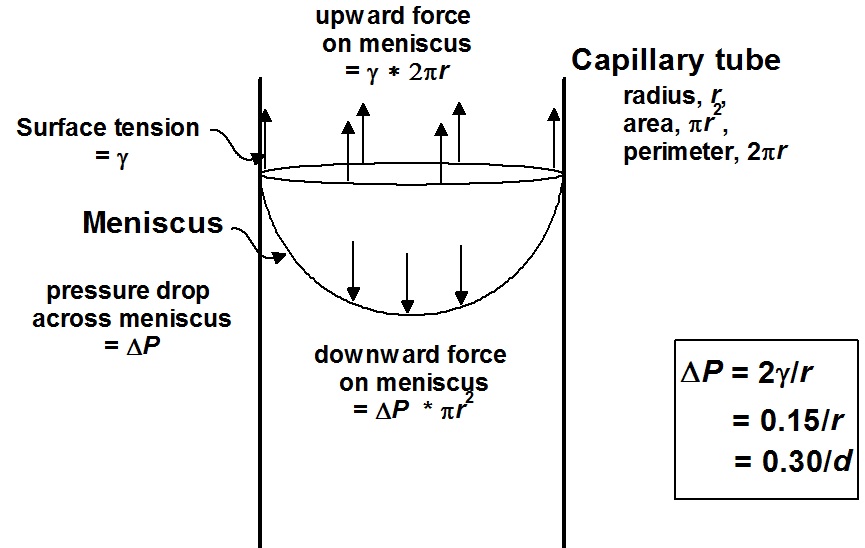 Although soil pores vary greatly in shape and size and are rarely cylinders, they are interconnected. The capillary equation applies to them just as it does to capillary tubes, because the curvature of all the menisci will be the same at equilibrium (at a given height) consistent with a uniform suction. The water-filled pores can therefore be effectively characterised as cylindrical pores with a radius equal to that of the curvature of the menisci.

The distribution of pore sizes in a soil, together with the depth of the soil, determines how much water the soil can hold for use by plants. There is an upper limit in the field that is affected by how fast gravity drains water from a recently-watered freely-draining soil, and a lower limit that depends on the ability of roots to take up water held at very large suctions.

Important parameters relating to soil water, and their measurement

Soil water content ( ) can be expressed either gravimetrically ( g, mass of water per unit mass of oven-dry soil) or volumetrically ( v, volume fraction of soil occupied by water). The relation between these two is given by v= b g/ w, where b is the bulk density of the soil (mass per unit volume), and w. Is the density of water.

Hydraulic head, h (m), is the height above a fixed reference in the gravitational field. It is related to soil water suction as follows: = wgh. It is more convenient to use than is when considering the drivers of water flow in soil.

Field capacity is the soil water content in a freely draining soil a day or two after a substantial watering of a previously dry soil. It is commonly called the “drained upper limit” (DUL) nowadays. It typically corresponds to a soil water suction in the range of 10 to 30 kPa. Water initially drains quickly from a recently watered soil because large pores are filled with water and the gravitational field induces a rapid flow out of them. As these pores empty, progressively smaller ones begin to drain, and they do so ever more slowly in accordance with Poiseuille’s Law (which describes how halving the size of a pore decreases its hydraulic conductivity by a factor of 16).

In practice, DUL loosely defines the circumstances in which an evaporation rate of a few mm per day (whether from the soil or as transpiration from plants) exceeds the rate at which water continues to drain, to redistribute as the wetting front moves ever more slowly into the drier soil below. Although approximate, it is an important agronomic parameter.

Drained lower limit (DLL) is an estimate of the lower limit of soil water content below which plants can barely extract water. It is usually defined as the soil water content at a suction of 1.5 MPa. It is typically measured using a pressurised chamber (“pressure plate apparatus”), illustrated below. The sample of soil is held in a squat cylindrical ring placed on a porous plate which contains pores so small that they can hold water against a gas pressure of at least 1.5 MPa. The soil is wet in situ, the pressure chamber is closed, and nitrogen gas is applied to generate a pressure difference of 1.5 MPa across the porous plate. Water is thus driven out of the soil sample, through the porous plate, until the suction in the remaining water-filled pores in the soil sample is at 1.5MPa. At this point the water stops flowing from the outlet. The pressure chamber is then opened and the oven-dry water content of the sample is determined.

Psychrometry (click to be linked to related page) is an alternative technique for determining soil water suction, especially when the suction exceeds 1.5 MPa.

The Plant Available Water Content is the difference between DUL and DLL. It typically varies with depth in a soil profile, and so has to be determined layer by layer in the soil to the depth of rooting.

The Soil Water Characteristic Curve is the function between soil water content and suction. It can be determined for a given soil by applying a range of pressures to samples in the pressure plate apparatus, or, at the wet end (suctions less than 100 kPa), by using a “tension table” which is similar in operation to the pressure plate, but involves applying a suction at the outlet rather than a pressure in a closed chamber. It is useful in helping to interpret experiments in which water supply may be affecting the behaviour of plants.

Pot capacity is the amount of water held in a pot that has finished draining after watering. It is often wrongly called “field capacity”, from which it usually differs greatly.

Water will not drain from a pot unless that water has zero suction, that is, the soil at the bottom of the pot must be saturated with water. Thus, once a pot has stopped draining, the soil at its base will be saturated, and the soil water suction will increase with height as outlined earlier. This means that the average water content in a potting medium will vary with the height of the pot. For example, the suction at the top of a freshly drained pot that is 100 mm tall would be 1 kPa, and at the top of a pot 200 mm tall would be 2 kPa. Both of these values are much lower than typical suctions (10-30 kPa) at field capacity.

Air-filled porosity. Soil can be too wet. As well as there being a lower limit of soil water content for the extraction of water by roots from soil, there is an upper limit that arises because roots need oxygen to operate. If the water-filled porosity in the soil is too high, the air-filled porosity may be less than about 10%, which can lead to hypoxia because the respiration of roots and soil microorganisms is likely to exceed the rate at which the consumed oxygen can be replaced by diffusion from the soil surface. That is why potting media usually have coarse ingredients, such as vermiculite or sphagnum moss, which create large pores that remain filled with air at low suctions.

Hydraulic conductivity, K (m s-1) is a measure of how easily water can flow in a soil. It is defined in the equation:

where F (m s-1) is the flow rate of water, and dh/dx is the (dimensionless) gradient in hydraulic head. It can vary by several orders of magnitude in soil, from 10-15 to10-9 m s-1 over the range of plant-available water in soil, because of the influence of Poiseuille’s Law, and the increase in the tortuosity of flow paths, as a soil dries and water-filled pores become progressively smaller.

v. It is related to the hydraulic conductivity, K, as follows:

The term d v/dh is the slope of the Soil Water Characteristic Curve (see above) at a given value of v. D typically varies from about 1×10-9 to 1×10-7 m2s-1 over the range of plant-available water in soil. This range is much less than that in K because the term d v/dh falls sharply with falling water content.