The following summary concerns xylem vulnerability curves in relation to cavitation of plant organs such as stems, petioles, leaf veins or roots.

A xylem vulnerability curve (VC) is a plot showing the relative variation of xylem sap transport capacity as a function of xylem water stress. 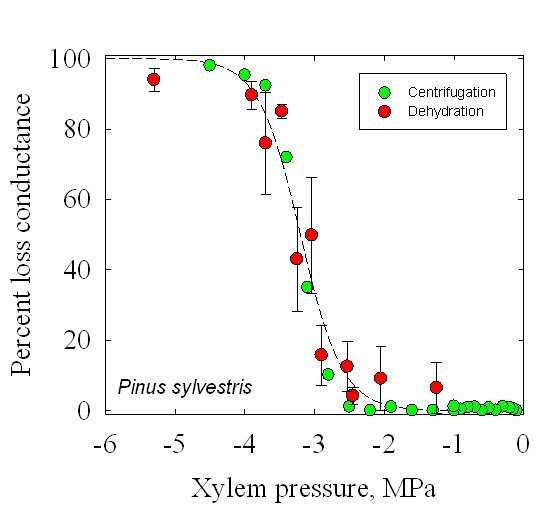 In this section, we deal with methods specific to the xylem tissue and on the impact of water stress-induced cavitation on its transport capacity. Methods to assess whole leaf or whole plant vulnerability curves will be presented elsewhere. The only relevant measure of water stress for the construction of VCs is the xylem pressure potential (P, MPa), the key variable that determines the induction of cavitation during water stress.

A number of methods have been proposed to establish VCs. They differ by 1) the way xylem transport capacity is measured and 2) by the way xylem water stress is assessed or induced. We propose a nomenclature based on these two entries, the method for induction of cavitation will be discussed first. For instance Bench Dehydration – Hydraulic conductance means: cavitation induced by dehydrating cut branches on a bench and cavitation measured by measuring the loss of xylem hydraulic conductance. Methods to induce xylem cavitation by water stress DehydrationThis is the most straight forward and natural way of inducing cavitation in plants.

A number of methods have been employed to detect the effect of cavitation on the xylem lumen content (air versus water filled).

These techniques measure the impact of cavitation on the xylem water transport capacity (embolism) which is best quantified by its hydraulic conductance. The percentage of loss of xylem conductance (PLC) is an indication of the percentage of xylem embolism.

These technologies are base on the fact that the process of cavitation is associated with the emission acoustic emissions. The techniques differed by the frequency of these emissions