Plant water transport occurs in a metastable state bearing the risk of hydraulic failure. Hydraulic conductivity loss is induced by cavitation, i.e. the breakage of the water column inside the small conduits. When a water column breaks, a small amount of energy is released. This energy is detectable with acoustic emission (AE) sensors operating in the ultrasonic frequency range (above 20 kHz). AE can thus be used in situ to assess cavitation in plants growing in the field or greenhouse or for generating vulnerability curves. A vulnerability curve is a plot of the hydraulic dysfunction versus decreasing water potential in the (secondary) xylem. Constructing vulnerability curves by means of acoustic emission (AE) and point measurements of water potential is based on the assumption that information extracted from AE signals is correlated with hydraulic dysfunction.

Acoustic emissions (AE) in the ultrasonic frequency range provide a non- to minimally-invasive tool to measure xylem embolism in plant organs. Previous work has shown a close correspondence between the number of AE and percent loss of hydraulic conductivity in stems and leaves of many species. Milburn & Johnson (1966) were the first to detect cavitation events in plants using sound transducers and amplifiers in the audible low-frequency range (< 20 kHz). In 1983, Tyree and Dixon applied a technique from engineering (e.g. pressure vessel testing) for detection of cavitations at frequencies between 100 and 2000 kHz, which led to the development of the Physical Acoustics Drought Stress Monitor (DSM) (Physical Acoustics Corporation, Princeton, NJ, USA) (Tyree & Sperry, 1989). In the ultrasonic frequency range, background noise can be successfully filtered out. The DSM counts AE/time and operates in the frequency range where maximum amplitudes are found, thus detecting cavitations in xylem non-destructively. During the past decades, professional AE testing equipment has been vastly improved, and quite cheaply available single or dual channel AE systems give waveform information for each single AE.

AE can be used in situ to assess cavitation in plants growing in the field or in greenhouse, or for generating vulnerability curves. Construction of vulnerability curves based on AE data works well in conifer branches and some angiosperm species (Cochard 1992, Lo Gullo and Salleo 1991, Mayr & Rosner 2011, Vergeynst et al. 2015), but can be quite tricky in many woody angiosperm branches or shoots (Rosner 2015). The main difficulty is to define the threshold of 100% conductivity loss, since AE of dehydrating branches comes from cavitation in vessels and fibers, shrinkage processes or mechanical failure of the wood (Kawamoto & Williams 2002). Even dehydrating bark tissue can produce AE in the high frequency range (Kikuta 2003).

The most commonly used sensor for detection of xylem embolism has been the Physical Acoustics Corporation R15, which has a frequency detection range of 50-200 kHz. This frequency range is suitable to detect cavitation (Tyree & Sperry 1989). Multiple response sensors, such as WD (frequency range 100-1000 kHz) from Physical Acoustics (Rosner 2012), and point-contact broadband sensors, such as KRNBB-PC from KRN Services (Vergeynst et al. 2015), enable the analysis of the frequency spectrum of AE. Transducers that come with an integral preamplifier are larger in size than those that need a separate preamplifier. Transducers are also available from other companies such as Vallen Systeme or Dakel.

A wide range of detectors that accept up to 80 AE transducers are available. These detectors must be installed as a PCI board in a computer or in an external chassis. Smaller systems may be assembled via USB-based components (node system, Physical Acoustics Corporation), and quite affordable single- or dual channel hand-held instruments are also available from Physical Acoustics Corporation (Pocket AE Acoustic Emission (AE) system) and from Vallen Systeme (ASCO-DAQ2).

Detection systems are provided with modular software packages for data acquisition, post processing or replay. The software packages can be customized for the specific demands of the user. Physical Acoustic Corporation comes with the AEwinTM Software; VisualAE and VisualTR are the data analysis tools of the Vallen AE-Suite Software. Both companies offer software for advanced data analysis: NOESISTM Software from Physical Acoustics Corporation and VisualClass Software from Vallen Systeme analyse waveforms based on e.g. pattern recognition. The advantage of the Vallen AE-Suite Software is its compatibility with the AEwinTM Software.

Amplitude –    Largest voltage peak in the AE signal waveform; expressed in decibels relative to one microvolt at the sensor output (dBAE)

Frequency       The number of cycles occurring in unit time of an oscillating signal.

The AE sensor is attached to the organ or tissue of interest (e.g., branch, leaf, etc.) on which a droplet of silicon-based grease has been applied. When pressing the sensor onto the organ or tissue surface, the grease is spread and covers the whole contact surface. The sensor can be placed on top of the sample if the sample is flat (e.g. on leaves), or clamped to the sample (Fig. 1). The surface of branches or stems must be smooth in order to guarantee reliable AE detection. For most species, it is preferable to remove the bark. Smooth and parallel surfaces can be achieved using a wood rasp file with different coarseness. Poor sensor coupling or air spaces between sensor and wood surface may lead to a lower AE detection rate and weaker (lower amplitude) AE signals. Movement of sensors will cause artificial AE. Wounds near the AE sensor are covered with silicone grease and parafilm (Pechiney Plastic Packaging, Chicago, IL, USA) (Fig. 1). The sensor should be attached carefully to avoid damage, and a second rehydration may be necessary after attachment (the rehydration process is described below in the chapter “Bench top dehydration…”).

On leaves, sensors are positioned on the upper side (i.e. adaxial) of the leaf, at the proximal third of the leaf midrib (Kikuta et al. 1997). 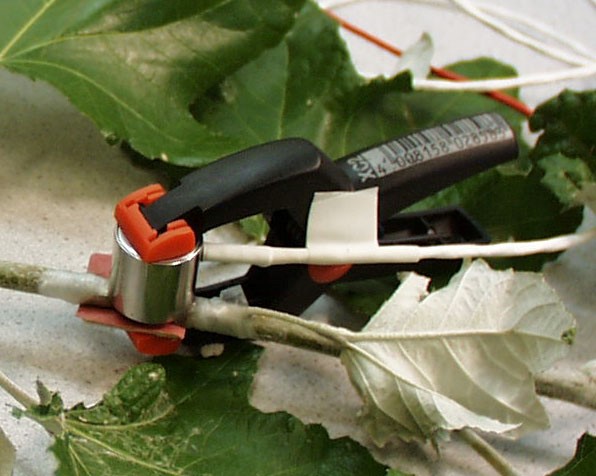 Fig. 1 Sensor mounting on stems: Wounds are sealed with parafilm.

When the sensor is mounted, it is connected to the AE detector. Prior to data acquisition, the amplitude threshold for AE detection and the levels of signal amplification for the sensor used has to be set in the AE acquisition software. A detection threshold of 35 dB is sufficient to filter out background noise under laboratory conditions (Mayr & Rosner 2012). Under field conditions, a threshold of 45 dB is suggested in order to avoid signals arising from plant organ movement due to wind (Steppe et al. 2009). After the plastic bag (shelter against transpiration as described below in the chapter “Bench top dehydration…”) is removed from the plant, data acquisition is started. The detector will continue collecting data until it is stopped. Detection time is dependent on the size of the plant material and on the species. Experiments may therefore take some hours up to several days. Once data collection is finished, the data can be exported to a spreadsheet and can be analyzed for number of AE signals, amplitude of each signal, signal duration, signal energy etc.

Bench top dehydration is performed on quite intact systems such as whole branches or shoots on which the water potential can be measured directly. Detached branches or shoots are harvested at pre-dawn and rehydrated over night. If possible, sensors are mounted on well watered plants or detached branches one day before the acoustic measurements take place. If (for some reason) the sensor has to be mounted shortly before the measurements, all cut ends have to be carefully sealed with parafilm or with plastic foil. During sensor mounting and before measurements, leaves shall be covered by a black plastic bag in order to avoid transpiration.

The AE method can also be used for the construction of hydraulic vulnerability curves of single (isolated) leaves (e.g. Johnson et al. 2009). As leaves dehydrate, the water potential of nearby (on the lab bench) leaves is measured as an approximation of the leaf water potential of the leaves to which an AE sensor is attached. The nearby leaves should be treated with silicon-based grease to mimic the conditions of the leaves to which the sensors are attached.

However, in many angiosperm species, 100% cumulative AE does not correspond to 100% conductivity loss (Rosner 2015). Nolf et al. (2014) recently developed an AE counting method where the AE rate peak is used as a proxy for 50% conductivity loss. The method is appropriate for diffuse- as well for ring-porous angiosperm species. P50 values assessed with classical hydraulic methods and P50 calculated from AE testing data were significantly linearly related.

The amplitude or energy of AE is closely correlated with conduit diameter in leaf xylem across species (Johnson et al. 2009) and in conifer branch- or trunkwood (Mayr and Rosner 2011, Ponomarenko et al. 2014). This relationship can be used for construction of vulnerability curves in plant parts where xylem conduits show a quite high variability in diameter (Rosner et al. 2006). The method has been tested so far on isolated conifer wood and conifer branches. The cumulated AE energy as a proxy for hydraulic conductivity loss is related to the water potential, which is either measured directly on branches (Mayr & Rosner 2011) or calculated from the relationship between relative water loss and water potential of a parallel sample set (Rosner et al. 2006).

If the AE amplitude of single signals plotted against time shows distinct clusters, AE sources of interest (related to conductivity loss) can be easily separated from other AE sources (cavitation in ray tracheids, shrinkage processes, mechanical failure). This clustering method has been applied successfully in small isolated conifer sapwood samples, where the water potential was measured by psychrometers (Wolkerstorfer et al. 2012). Cumulated AE are collected from the first AE cluster solely and are thereafter related to the water potential.

The AE method has been used for the construction of hydraulic vulnerability curves of isolated wood material (Kikuta et al. 2003). AE sensors are attached to samples and are intermittently weighed while collecting AE data. Relative water loss is measured in parallel samples as they dry (Rosner et al. 2006) or in small samples along with water potential using screen-cage psychrometers (Wolkerstorfer et al. 2012). Once the relationship between relative water content and water potential has been established, the weights of the AE samples can be converted into water potentials for the construction of the vulnerability curve. Attaching the sensor to wood samples also requires stripping the bark, which can damage xylem and allow for dehydration, and may explain the discrepancies between AE and percent loss of conductivity observed in well-hydrated samples with few embolisms (Mayr & Rosner 2011).

Sensors attached to freezing branches revealed AE activity predominantly on freezing but not on thawing, which is in contradiction to the “thaw expansion hypothesis” (Mayr and Sperry 2010). Experiments demonstrated a close link between drought and freezing stress (Mayr et al. 2007, Zublasing and Mayr 2007, Charrier et al. 2014b). For AE analyses it has to be considered that acoustic properties change when water turns into ice. However, this may be used to detect ice formation (Charrier et al. 2014a).

Millburn JA, Johnson RPC (1966) The conduction of sap. I. Detection of vibrations produced by sap cavitation in Ricinus xylem. Planta 69, 43–52.

No health, safety or hazardous disposal problems are caused by the method described.

This protocol has been tested on woody species such as Norway spruce (Picea abies) and poplar (Populus alba, Populus tremula).

Detection of AE is probably restricted to plant species or plant organs with a conduit size of more than 4.5 µm (Johnson et al. 2009).