This article is modified from Perez-Harguindeguy et al (2013). The “New handbook for standardised measurement of plant functional traits worldwide” is a product of and is hosted by Nucleo Diversus (with additional Spanish translation). For more on this trait and on its context as part of the entire trait handbook visit its primary site Nucleo DiverSus at http://www.nucleodiversus.org/?lang=en

Branching architecture refers to how intensively a plant branches (number of living ramifications per unit of stem length). Highly branched plants can be better defended against vertebrate herbivores, primarily by making feeding less efficient, denying access by herbivores to plant organs, and ensuring that, if herbivores do remove growing tips, there remain enough for the plant to continue growing. Conversely, less branched plants can be adapted to environments where growing tall quickly is necessary, as in a fire-prone savannah or a forest undergoing the pioneer stages of secondary succession. Branching architecture can also be adaptive in forest systems, where species that utilise low light tend to be more branched for a given height than are species that utilise only bright light.

Although there are complicated and elegant methods for evaluating branching architecture, a simple characterisation such as the one described below is often sufficient for understanding the adaptive significance of this trait. Like spinescence, branching architecture is a plastic trait that can differ within a species on the basis of browsing history, fire history, access to light, plant vigour or disease and even water stress. Branching architecture is also variable depending on the age and life history of the plant (see Selection of species and replicates for functional trait analysis for recommendations related to variable traits).

ADI – apical dominance index – Divide the number of ramifications by the total length of the branch in metres.

To assure measuring a branch that best represents the branching architecture of a plant (a branch that reaches the outer part of the canopy), work backwards from a terminal, leaf-bearing branch until reaching the first branch that is now leafless at its base but bears secondary branches that have leaves. The base of this branch will be the starting point for measuring (1) the total length of the branch, which is the distance from the starting point to the tip of its longest-living terminal and (2) the number of ramification points that lead to living branches; from each ramification point, move towards the tip, always following the most important branch (the main branch is often the thickest living branch coming from a ramification point; see Fig. 1 for a graphic explanation). An indicator of branching architecture, called apical dominance index (ADI), is obtained by dividing the number of ramifications by the total length of the branch in metres. The value of ADI can vary between zero (no branching) to >100 m-1(extremely ramified). 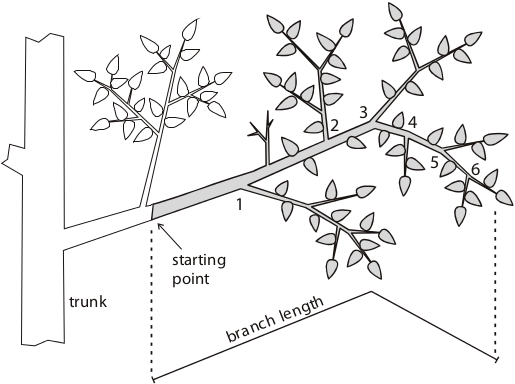 Fig. 1. Measurement of branching architecture. Numbers indicate ramification points to be considered for the calculation of the apical dominance index (i.e. number of ramifications per meter of branch). Note that dead branches are not considered in the index.