This protocol explains how to measure the mechanical properties of plant shoots and model their performance in wind (Butler et al. 2011). Two pieces of equipment are essential: (1) a materials testing machine (e.g., Instron, Model 5542), and (2) a roof-mounted shoot testing system, which must be self-manufactured. Further specifications for this equipment are given below. After measuring the performance of stems and shoots using this equipment, several mechanical properties of shoots can then be calculated (see below: “Units, terms, definitions”) and from these properties, models can be applied to estimate the performance of shoots in wind. For example, these models can be used to determine if one species of plant is more likely to break or streamline in wind than another species.

Plant stems have multiple functions, but perhaps the most evident of these functions is to provide mechanical support for the leaves, or other similar photosynthetic organs (e.g., phyllodes). Considering shoots as purely mechanical objects, they are subjected to several forces constantly threatening to upset them, such as gravity, animals, other plants, snow, ice, rain, and yes – wind. It is well understood that wind can and does cause substantial damage to plants. It is logical therefore that the structure and performance of plant species have evolved to successfully meet the unique challenges that wind presents. Wind drags on leaves and branches, bending them and changing their shape, sometimes to the point of failure. The measurements described in this protocol assist in quantifying a shoot’s ability to resist and/or avoid (e.g., streamlining) the effects of wind drag.

– Materials testing machine. Any device that can measure both the force applied to a material and the “distance” the material flexes under this force. Most commonly, a 3-point bending test is applied using this machine to measure Young’s modulus (E) and the modulus of rupture (MR). Please see this link for further information on how to carry out these tests. Most commonly, commercial machines are purchased for this purpose, although 3-point bending tests can be performed without the aid of a machine or software.

– Roof-mounted shoot testing (RMST) system. This apparatus is essential to carry out this protocol and functions to firmly attach the shoot to the roof of the vehicle and to measure the drag (D) onto the plant during the experiment (with the Load cell). There are no commercially available RMST systems available and this piece of equipment must therefore be self-made (see figure 1 and 2) 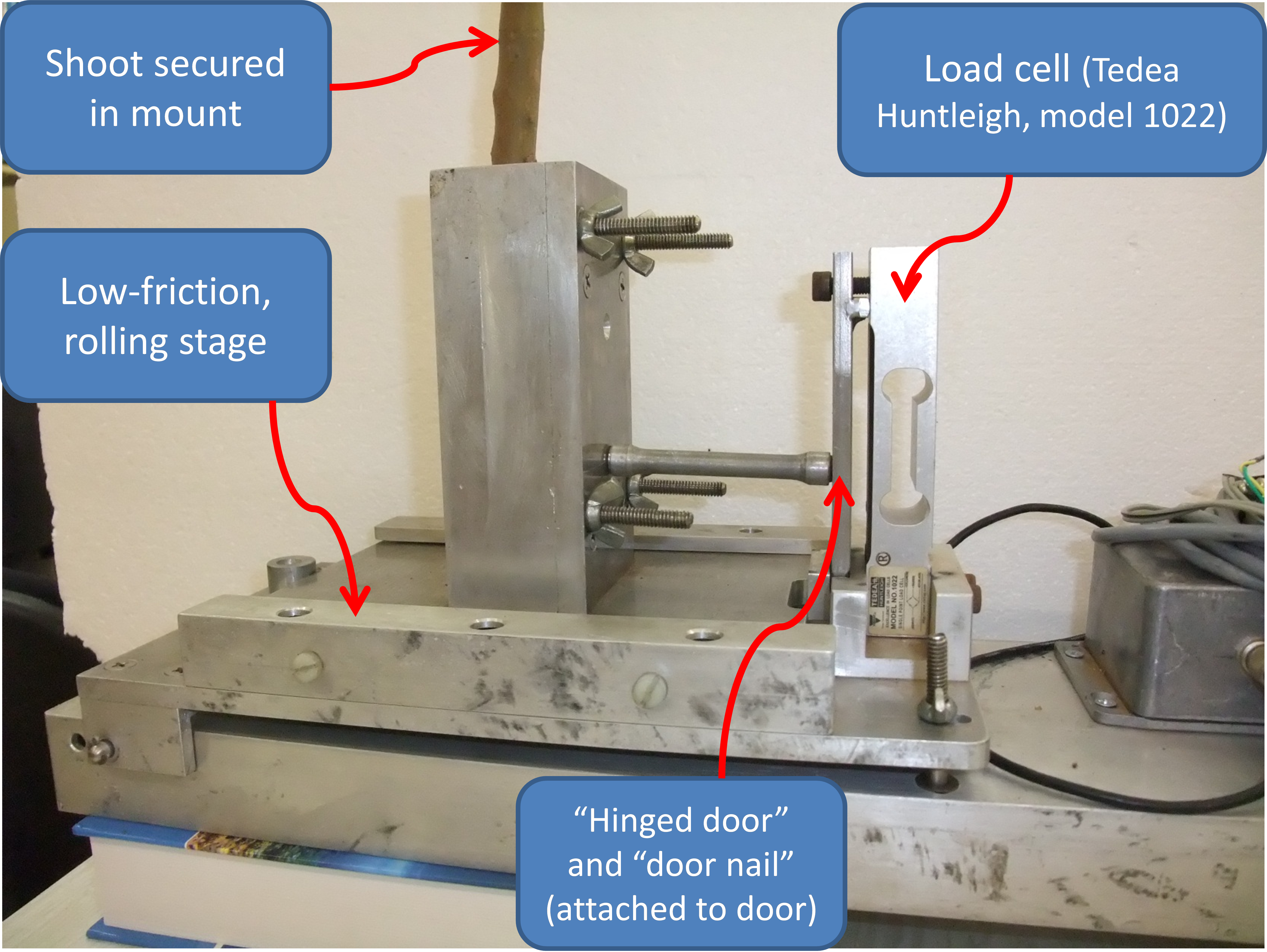 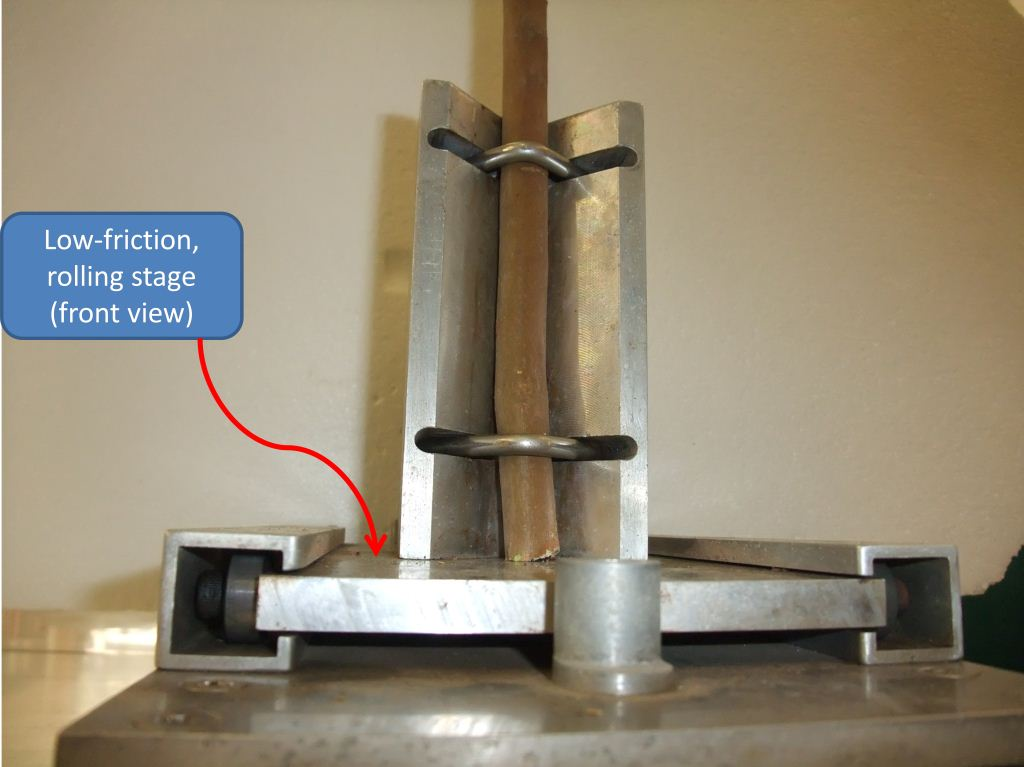 – Webcam. Any camera than can record deformation of the shoot during testing on the RMST. A common plug-and-play internet webcam is perfectly sufficient.

– Scale stick to provide scale for photographs of the specimens 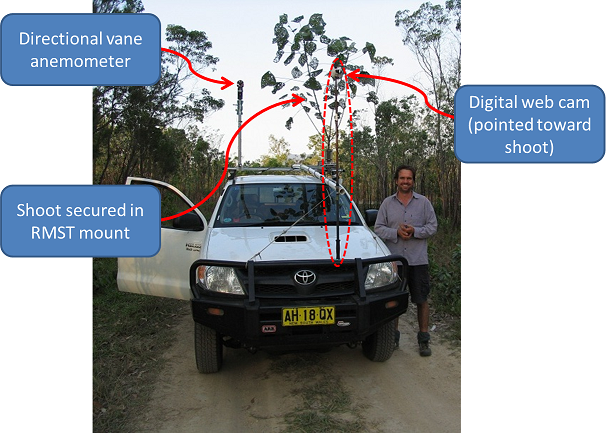 Figure 3. Photo of vehicle set up with RMST, anemometer, and webcam. Data from the anemometer and the pressure cell on the RMST are both connected to a datalogger, whereas the webcam is connected directly to a laptop computer via the USB port. Both, the datalogger and laptop are operated from within the vehicle. See also Fig. 1 in Butler et al 2011.

Young’s modulus (E): In lay-speak, this is a measure of how stiff a material is. Materials with a larger Young’s modulus are stiffer, that is, more force must be applied to bend the material. More exactly, and in the case of branches, it is the slope of the stress vs. strain curve obtained by applying a known force to a material of specific dimension (radius and length). This parameter can be easily measured on a materials testing machine using material of suitable length and width, see link.

Modulus of rupture (MR): This is a measure of the maximum stress a material can withstand before breaking. This parameter can also be easily measured on a materials testing machine.

Shoot frontal projected area (AS): Amount of shoot area occupied by leaves when viewed from the front (Fig. 3). Images must be obtained from the mounted digital camera and analyzed in Image-J to estimate this variable. An image of the shoot at rest must be captured with a suitable, high contrast scale to enable the images to be scaled (i.e. to calculate pixels per distance). Once scaled, trace over the shoot and convert the resultant image to a 2-bit representation, i.e. black (shoot) and white (everything else). The number of black pixels in the image, transformed by the image scale, provides a measure of shoot area. Frontal area at speeds other than zero are calculated by the same process but assume the same scale as the image captured at rest. Please refer to “Measuring leaf perimeter and leaf area” protocol on Prometheus Wiki to assist with using Image-J software.

Resistance to bending (E.I.): Product of Young’s modulus and the second moment of area.

Bending moment arm length (LM): Vertical length from the top of the RMST mount to the center of shoot area. The 2-bit image developed to measure shoot area can also be analysed to estimate this variable. Find the centroid of the pixels describing the shoot and measure the vertical distance from this point to the top of the RMST mount (again you need the image scale to transform to real distance) in Image-J. Please refer to “Measuring leaf perimeter and leaf area” protocol on Prometheus Wiki to assist with using this software.

Bending moment (M): Product of “bending moment arm length” (LM) and drag (D) at a given wind speed. D is interpolated from a quadratic fit as described above.

Bending stress ( max): Bending stress at the stem surface at the top of the RMST mount; max=(M r)/I where M = bending moment at a given wind speed, r = radius of the stem in the direction of travel, and I = second moment of area.

Safety factor (SF): Ratio of MR to bending stress ( max) at a given wind speed.

A three-point bending test should be performed to measure Young’s modulus and the modulus of rupture on green branches of similar diameter as those used in the RMST. At least three replicates should be done for each species that will be tested in the RMST. For details on how to carry out these tests please see the following link.

– The excised stem should be laid horizontally on a clean white cloth of known dimensions (a meter stick placed next to the shoot helps in this regard) and a colour digital photograph should be taken ca. 1.5 cm directly above the shoot. After clamping the shoot securely in the RMST mount (Fig. 2, see also Fig. 1 in Butler et al 2011), a scale-stick with high contract sections of known length should be held vertically and adjacent to the shoot and RMST mount while another picture is taken with the vehicle-mounted webcam (Fig. 3). These webcam images, when the shoot is at rest, are used to estimate shoot frontal projected area (AS), and to provide scale for images used to estimate bending arm length (LM) at various speeds (see “units, terms, definitions”). The diameter of the shoot should be measured at the top of the RMST mount in the direction of travel and also perpendicular to this direction. The second moment of area (I) and resistance to bending (E.I.) can now be calculated (see “units, terms, definitions”).

– At this point, the webcam, datalogger, anemometer, pressure cell, and laptop should all be turned on. Start recording while the vehicle is stationary to provide a -baseline’ check that the load cell and other components are operating normally. The vehicle should be accelerated to 10 km hr-1 (as indicated by the vehicle’s speedometer) on a flat and straight road and held at constant speed for at least ten seconds. During these ten seconds, webcam images, wind speed data from the anemometer, and force from the pressure cell should be logged ca. every second. The vehicle should then be accelerated to 20 km hr-1 and images, wind speed, and force be logged again. The vehicle’s speed should be stepped up in 10 km hr-1 increments and data collected in this way, until the final speed is achieved (in our case this was 100 km hr-1). At this point, the vehicle should be stopped, the shoot removed from the RMST mount, and re-photographed while lying flat against a clean cloth of known dimensions. Wind speed data from the anemometer and force should be averaged for each shoot at each speed-step. This entire procedure should be repeated ca. five times with an empty RMST mount to measure the drag on the RMST mount itself. We note that the RMST will give better results when there is no wind, but will still yield suitable data providing wind gusts do not exceed ca. 15 km hr-1 and a directional vane anemometer is used.

– Drag on the empty RMST mount must first be modeled, so that it can be subtracted from the shoot+mount data. Drag for all runs conducted with the empty RMST mount should be fitted with single quadratic models without an intercept (the “lm” function in R can be used to do this, i.e drag~speed2+speed+0). This model can then be used to predict drag on the empty apparatus for any given wind speed, within the range measured.

– Drag on shoots is then calculated by subtracting the drag on the empty mount from the drag on the shoot+mount. These corrected values can then also be modeled with quadratic equations. The model fits are used to interpolate drag at specific speeds chosen for comparison across shoots and used to calculate Drag coefficient (Cd), bending moment (M), bending stress ( max), and safety factor (SF) at any chosen wind speed (see “Units, terms, definitions”).

– After correcting the raw drag data for drag on the empty RMST mount, as described above, these data should be log-transformed and fitted with a standard major axis (AKA: reduced major axis) trend line. The slope of this line describes the streamlining efficacy (v) of the shoot. Drag on a rigid object that cannot change shape (i.e., a “bluff body”) will scale to the square of wind speed. Because leaves and shoots “streamline” when subjected to wind, their scaling exponent is less than two (Vogel 1984). Smaller scaling exponents (i.e., the slope of the standard major axis log-log regression line) indicate more efficient streamlining.

While driving the vehicle to simulate windspeed appropriate care should be taken to guarantee safety of the researchers. This includes finding a long and straight track without obstacles and (very little) traffic. At least two people are needed to carry out this protocol, one driving the vehicle and another logging the required data. Always use safety belts.