A good method for determining leaf hydraulic conductance and xylem vulnerability of species with reasonably large hydraulic capacitance (e.g. conifers and temperate evergreen species). The technique measures the flow of water that is sucked into a leaf as it rehydrates from a predetermined water potential. The initial flow rate as well as the decay in flow indicates the hydraulic conductance of the leaf and its capacitance (or its capacity to buffer changes in water content).

Determining the hydraulic conductance of dehydrated leaves is difficult because stomata are closed and hence it is very difficult to establish a steady flow of water from which the conductance can be calculated. This technique uses the water tension in the leaf tissue to pull water through a flow meter enabling the calculation of leaf conductance as the leaf rehydrates. Leaves can be dehydrated to different levels before measuring hydraulic conductance, thereby allowing the determination of leaf xylem vulnerability to water tension. The technique is useful because it requires a minimum of equipment and is hence easy to apply in the field.

Shoots from the most recent fully expanded growth-cohort should be used. Branches are collected during the morning and immediately bagged to induce stomatal closure and to ensure uniform the leaf water potential ( leaf) in the sampled shoot. Prior to rehydrating the sample shoot, leaf is determined from two neighbouring shoots or leaves from the same branch. When leaf in the neighbouring leaves differs by more than 10% shoots should not be used

The sample shoot or leaf is then excised underwater and immediately connected to a flowmeter where it remains under moist paper towel (to prevent transpiration) at 20∘C with flow rate logged every 5 s. Rehydration flow is typically logged until flow rate decays to about half the initial maximum recorded immediately after leaves were connected. Where leaves are measured while attached to stems it is important to use very short stem segments (if possible shorter than the average vessel length to ensure that >90% of the hydraulic resistance to flow during rehydration is due to resistance in the leaf rather than the attached stem.

Subsequently, shoots are disconnected and immediately wrapped in moist paper towel and transferred to a Scholander pressure chamber (PMS, Albany, OR, USA) for determination of final leaf. Kleaf is calculated at the two instantaneous points corresponding to the initial and final leaf using equation 1:

where I = instantaneous flow rate into the leaf (mmol s-1); A = projected leaf area. This equation assumes that leaf represents the water potential gradient from the petiole to the mesophyll (ie the water potential at the excised petiole is very close to zero).

Gradual desiccation of excised shoots or potted plants can be used to provide a range of leaf from which leaf vulnerability can be assessed by measuring Kleaf as branches or plants dry out.

Leaf capacitance can also be measured directly from the bulk volume of water absorbed by a partially desiccated leaf or shoot while connected to a flowmeter. Leaf hydraulic capacitance (Cleaf) is calculated as the volume of water taken up by the leaf during a transition from o to f (see Figure 1):

where F = sum of the flow of water into the leaf during rehydration adjusted for leaf area (mmol m-2) and temperature following Brodribb and Holbrook (2006); o = initial leaf water potential (MPa); f = final leaf water potential (MPa). Importantly, initial maximum flow (F) in these rehydration plots was determined by fitting an exponential curve through the data points and extrapolating back to the initial point of leaf excision, taking into account the two-three seconds required to connect the sample to the flowmeter. 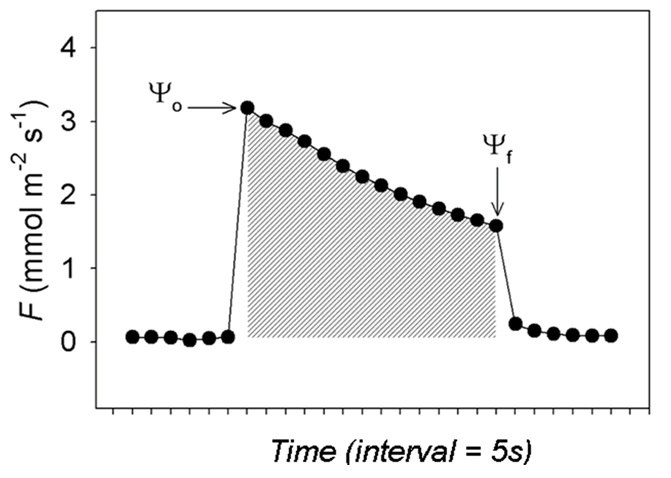 Figure 1. Leaf Capacitance calculated as the volume of water (indicated by the shaded area beneath the data points) taken up by a rehydrating leaf connected to a flowmeter during a transition from o to f (see equation 2). Kleaf can be calculated at o and f using equation 1.

There are two things to watch out for when using this technique.

Protocol is most suitable for woody and herbaceous species from temperate and Mediterranean climates.