The climate has a huge impact on the crop growth and development, and the stress that the plants will experience. Recording accurately the main climatic variable is thus crucial.
‘Stable’ weather station. Solar radiation, rain, maximum and minimum temperatures are typically recorded daily by research stations and some other organisations. Other factors such as wind speed, air humidity, pan evaporation are sometime also measured. The problem with these stations is that (1) they can be far from the field trial, while environmental factors such as rain can vary within short distances, and (2) they only deliver daily measurements, that are not always accurate to evaluate stress events (e.g. radiation frost nights).
-Portable’ weather station. A better alternative is to install a weather station in the field trial, to record climatic data more frequently (e.g. measurements every min can be averaged (or totalled) and recorded every 15 min) and with a better accuracy (e.g. factor such as wind or rainfall vary greatly spatially). Typically these weather stations have a solar radiation sensor, a tipped-bucket rainfall gauge and an air temperature and relative humidity probe mounted in a Stevenson screen (Fig. 6). In additional, many other sensors can also be included, such as:
– thermistors to measure soil temperature,
– thermocouples to measure soil, leaf or apex temperatures (temperature of the apical meristem can be approximated by soil temperature at 1-2cm deep up to stem elongation, and then by temperature of thermocouples placed between the sheath and the stem); thermocouple in the air without any protection can also be used to record frost event at night,
– infra-red sensors to measure canopy temperature continuously (the canopy has to be closed)
– solarimeter tubes to measure light interception (cf Fig. 11),
– an anemometer and a wind vane to measure wind speed and direction.
Such weather station can be powered by a car battery with a solar panel. Depending on the number of data recorded (i.e. number of variables measured and time-step of measurements) and on the data-logger memory capacity, data may have to be downloaded every few weeks (intense measurement setup), months, or just at the end of the season (minimal setup). In any case, it is recommended to download the data regularly to check that all the sensors are properly functioning.
A new generation of sensors and data loggers is being developed to enable remote access to the logger so that it is now possible to access data remotely, in real time. Independent sensors (i.e. -self-powered’ and with integrated communication system) should become accessible in few years so that it will be possible to measure climatic variable (e.g. canopy temperature) over time and for each plot without connection cables.
Note the sensor calibration should be checked regularly for accuracy (e.g. once a year for solar radiation sensors). 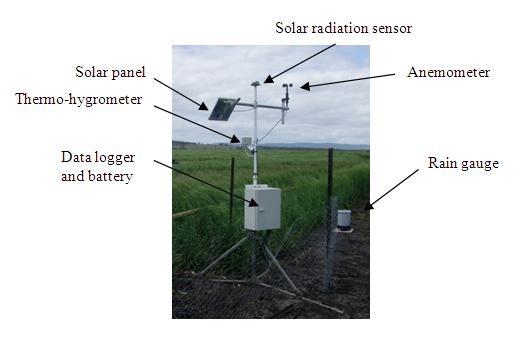 Figure 6. Field weather station with a solar radiation sensor, a air temperature and relative humidity sensor, an anemometer, and a tipped-bucket rain gauge. This station is powered with a battery charged by a solar panel. Data are averaged and recorded on a data logger.