Phenotyping of complex traits and particularly those associated with canopy development, biomass and yield is challenging when experiments comprise diverse genotypes. This is especially so when confounded with variation in traits such as height and maturity which are known to affect yield. Limited seed and resources may encourage field-assessment in single, spaced rows or smaller, unbordered plots. Competition for water, light and nutrients required for canopy growth is variable and non-definable where immediate neighbours are genetically different, and particularly under stress conditions where competition is greatest. Response to changes in resource availability varies among diverse genotypes, alters genotype ranking and thus reduces heritability. In turn, the relevance of such growing conditions to commercial field-grown crops is at best unclear and at worst dubious.

The planting of multi-row plots and the simple exclusion of plot borders at harvest increases experimental precision and confidence in genotype response. A simple study where six wheat genotypes were assessed for spike number at two nitrogen levels demonstrates how including outer rows in the analysis can lead to substantial error in trait estimation and in the associated genotype by environment interactions (Fig. 3).

Well-planned field studies and particularly those focusing on the dynamics of yield formation (canopy-related characteristics) must consider the use of multiple-row plots and with border rows to minimize the effects of interplot competition. Whether these border rows are best excluded, or considered as part of genotype performance will depend on the environment but we recommend they be excluded, especially where stress (eg water deficit) has been applied. 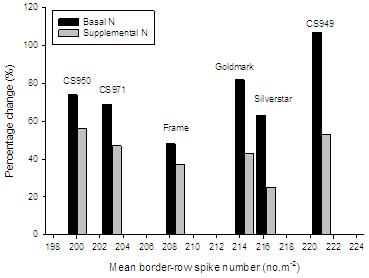 Figure 3. Comparison of spike number in the inner and outer rows for six wheat genotypes and two nitrogen levels: basal and a supplemental 40 kg/ha N predrilled at sowing. The outside, border rows averaged 56% greater spike number than for centre rows, with variation between genotypes presumably due to their internal tillering propensity (lsd0.05 = 7%). Over all six genotypes, the association for border and centre-row spike number was 0.50ns and 0.74ns for basal and supplemental N treatments, respectively. This lead to the border rows having a 54% yield increase compared to the centre rows, and a poor association (0.48ns) for yield of the border compared to the guarded centre-rows. Overall, an average 25% error would be made if including the outer rows in the analysis.