This protocol consists of a collection of different protocols that can be used to address the wide scope of issues that can be resolved with MRI.

Nuclear Magnetic Resonance Imaging (MRI) is a versatile technique that is mainly used to follow water status and dynamics inside a wide range of objects, including plants. For seeds and hypocotyls organic molecules can be monitored, but this falls outside the scope of this protocol. Water inside a plant can be polarized inside a magnet, excited by r.f. coils and located when combined by magnetic field gradients, see (Haacke et al 1999) for a good explanation.

Using MRI we can look at the local water density (ml/cm3), local mobility (diffusional processes) and macroscopic mobility (flow), for which different measurement techniques exist. Since plants have many air pockets a wide range of standard MRI techniques (called sequences) are not so suitable for plants, so we are mostly restricted to a set of so-called spin echo based techniques, not gradient echoes. A schematic of the former is presented below.

It should be noted here that in non-imaging mode other applications become feasible, like following dry mass changes, which can also be performed with portable equipment. 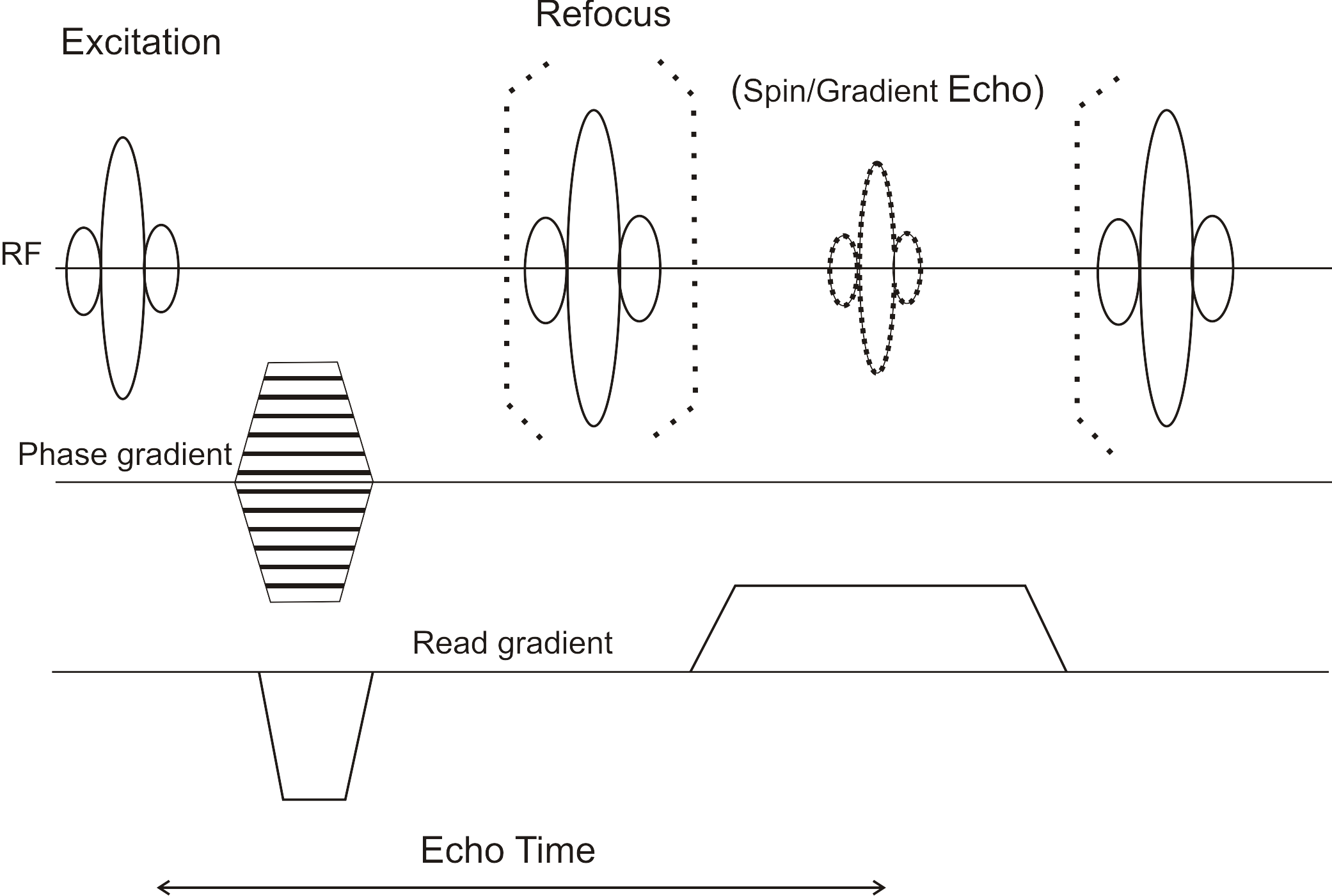 For MRI of plants there is no such thing as the ideal field strength. Low fields have shown to work very well with membrane permeability studies (van der Weerd et al 2002) and flow (Scheenen et al 2000), high fields with vertical access are better suited for high-resolution work (Köckenberger et al 2004), even while using larger r.f coils (Nagel et al 2009). Since signal-to-noise decreases with r.f. coil diameter, openable coils that fit tightly around stems or other plant parts are preferable. Divisible gradients offer the potential to work at higher resolution while the plant is sticking partly outside the measurement zone. Low field, portable equipment can be used well for field work, but is still, for the most part, in development

Working near and inside strong magnets requires that all ferro-magnetic equipment parts are removed or attached in a sturdy fashion to non-moveable parts. Nearby the measurement zone these cause severe image degradation so local sensors, e.g. to monitor temperature or moisture, should either be non-ferromagnetic or be used several tens of centimeter away from the measurement zone. Any conductive wires connected to equipment outside a Faraday cage (normally present for NMR equipment) should pass through some kind of r.f. filter. Otherwise these should be brought inside the Faraday cage.

TE – Echo Time (s), time after excitation that echo occurs and is acquired

The following list is not complete but covers the most widely used applications for MRI on plants. Other methods can be and are used, but this would spring the scope of this section.

In order to measure fluctuations of the water density, the Echo Time should be set as short as possible and even then a multi-echo measurement that can be used to correct for T2influences is desirable. The repetition time should be set to at least 3 times the longest relaxation time T1in order to avoid saturation effects. In this manner local water density can be followed and compared on either a pixel by pixel basis, or on a tissue basis.

In general there are few required preparations except for pruning well in advance, to make sure the plant fits into the magnet without leaves getting squeezed or branches damaged, which would cause water redistributions that may take a considerable amount of time before proper plant recovery. Measurement conditions and standard growth climate conditions for the plants should be kept as similar as possible. In case the plant can be climatised during measurements, air flow should be reduced until no motional artefacts are detected for MR Imaging.

It is important to control the soil water availability for experiments that study the influence of other parameters, like light. Similarly the plant temperature needs monitoring to exclude temperature effects on signal.

Standard filtering and Fourier transformation (e.g. using IDL or MatLab). Since this type of measurement normally requires a comparison between images, a routine to shift individual images is required and can be performed in many different ways. Instead of a pixel by pixel comparison, a tissue by tissue comparison can be performed for more accurate results. Again, there a many ways to do this, the most straightforward being segmentation on basis of gray value.

The most significant influence on water mobility is posed by the cell membranes. Rotational diffusion of water is also attenuated by the presence of macromolecules, but this effect is not that large. The main cause of a reduced rotational mobility of -water protons’ is due to chemical exchange with macromolecules. Such effects are mainly visible on T1and T2relaxation times and are determined using a multi echo sequence in combination with different repetition times (so-called saturation recovery).

T1-T2 determination is performed fastest by a multi echo saturation recovery experiment since it is much faster than an inversion recovery multi echo experiment. Settings of echo times, number of echoes and range of repetition times vary wildly, depending on plant species, age, section of interest, but also magnetic field strength. Lower fields tend to yield longer T1‘s and T2‘s, requiring more echoes and longer delay times. At high field the presence of organic molecules with exchangeable protons is the predominant T2influence, for T1chemical exchange with -solid’ protons is predominant. Therefore shorter echo times and increased repetition rates are required. For good T2fits the signal should decrease to at least exp(-1) times the first echo, preferably using more than 8 echoes. For saturation recovery signal should recover to more than (1-exp(-1)).

Diffusion measurements in plant tissues need to be corrected for T2 effects. At sufficiently high SNR T2 can be used to determine more diffusion constants (van Dusschoten). For measuring membrane permeability, the coding time Dshould vary between a few milliseconds and preferably a few seconds, depending on tissue T1. Hybrid sequences like pfg(ste)cpmg are the preferred method (van Dusschoten et al 1996).

After fourier transformation even echoes may have to be shifted and inverted relative to odd ones depending on the exact type of sequence used. Although the 2D Inverse Laplace transformation could be used for these 4D data sets (2 spatial coordinates plus 2 time axes or a time and a gradient strength axes) a faster and equally well suited techniques, especially if SNR limits the relaxation components to be found to 1, is a 2D fitting routine.

There are only a few techniques well suited for flow imaging in plants. In order to obtain quantitative flow rates, conductive area, xylem and phloem discrimination, a wide range of settings need to be observed. Coding delays ( ), gradient strength and duration, number of steps, spatial resolution and measurement time. In order to discriminate flow from diffusion, long delay times are required, which is severely restricted at high field due to shorter relaxation times. For flow a low to moderate field strength is best, combined with high gradient strengths (> 500 mT/m), small r.f. coils tightly fitting around the stem for sufficient SNR and plant specific testing to find optimal settings for determining flow.

See protocol 1. Especially for flow measurements plants need to recover after placement in the magnet bore. This may take several hours.

Flow images may be 3D (the third axis being displacement) and may require a 3D fourier transform. For flow measurements SNR normally is the limiting factor requiring averaging of flow conducting zones, using masks. The method described by (Scheenen et al 2000) to quantify flow is model-free, since no detailed knowledge on local flow profiles is available.

For morphology measurement contrast and resolution are the key parameters to focus on. At low field (below 1 Tesla) contrast is mainly caused by cell size and some membrane permeability. At higher field the concentration of small organic becomes predominant for T2 contrast (setting TE high gives high contrast). T1 contrast is predominantly influenced by the amount of cell wall relative to overall cell size. Reducing the repetition time increases contrast. Increasing contrast comes with a reduced signal to noise ratio, which can only be compensated with more averaging.

Most magnets suitable for medium sized plants show a resolution limit at about 25 m, using very small r.f. coils tightly fixed around stem parts. Otherwise expected resolution is above 50 m or worse. This may make contrast more difficult to interpret if individual voxels contain more tissue types. This is especially true when the slice thickness must be reduced when cylindrical symmetry is lost, e.g. near branching points. Here, a compromise between contrast, resolution, signal to noise and measurement time (a plant should not move are change during measurements) must be sought.

In case contrast is unclear a combined T1-T2measurement can be performed.

This kind of study requires the least amount of plant preparation, as long as the measurement conditions or similar to the standard climatic conditions of the plant. Otherwise, the plant should be allowed to equilibrate before the final measurements start.

Due to the high magnetic susceptibility difference between soil particles and water, the spectral width should be set higher than 100,000 Hz. The appropriate Echo Time is a compromise between signal to noise and contrast between soil water and root water. This depends on soil type and magnetic field strength. A resolution of a few hundred microns combined with a slice thickness of about 1 mm is appropriate for many middle large plants (barley, wheat, maize, sugar beet, pea or castor bean). A multi slice excitation, running in parallel, is the most time-efficient approach for generating a 3D root images. For longer tubes or pots, the root system is acquired in subsequent stacks of images that need to be combined to deliver a full root image.

A soil mix with large and small particles, free of organic material should be used (no peat). At high field the iron(-oxide) contents should be low, all ferro-magnetic material should be removed using strong permanent magnets. Depending on the field strength the soil mix can be optimized such that the soil water background signal is minimized or even absent.

At our 4.7 Tesla magnet a pot of 90 mm with a length up to 1200 mm works fine for a plant with many fine roots (~ 200 mm). Wider pots cause a decrease in minimal detectable root diameters.

Standard Fourier transformation. At the moment few automated routines exist with which to stitch together the image stacks or view the 3D root on a pixel base (use e.g. MewisLab). (Automated) analysis software for determining root mass, root length, branching etc. is work in progress.

Windt CW (2006) MRI of long-distance water transport: a comparison of the phloem and xylem flow characteristics and dynamics in poplar, castor bean, tomato and tobacco. Plant Cell and Environ. 29, 1715-1729.

Strong magnetic fields may be harmful to people with pace makers or implants in general. No harmful effects have been detected thusfar on healthy people. Only within the magnet, fast motion may cause dizziness due to the Foucault current inside the brain. The main danger is caused by ferro-magnetic parts that have not been properly fixed and may fly towards the magnetic centre or other zones of the magnet. This may result in injuries. Furthermore some credit cards, mobile phones and wrist watches may stop working, temporarily or infinitely